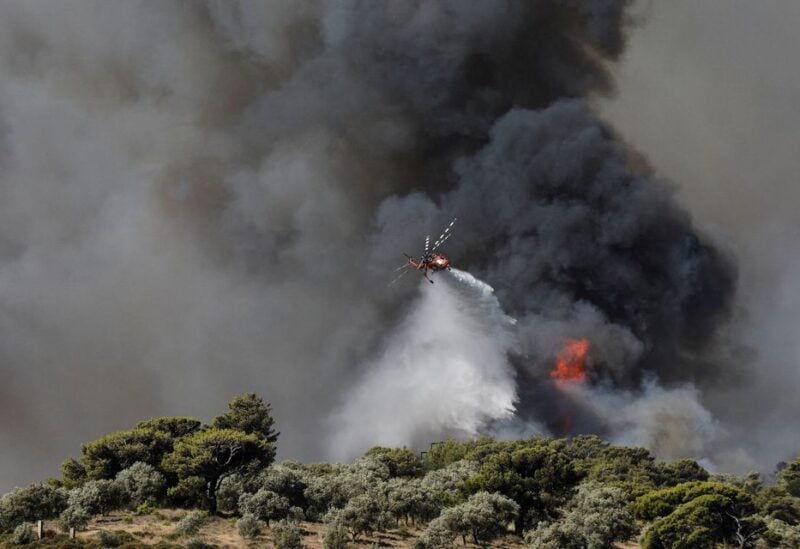 A firefighting helicopter makes a water drop as a wildfire burns in the Pikermi suburb of Athens, Greece, July 20, 2022. REUTERS/Louiza Vradi

A wildfire raged in the mountainous region of Penteli region near Athens on Wednesday morning, scorching homes and forcing authorities to order the evacuation of at least nine neighborhoods and a hospital. The fire was fueled by gale-force winds.

Around 1430 GMT on Tuesday, a fire on Mount Penteli, which is about 27 kilometers (16 miles) north of the center of Athens, started. Thick clouds of smoke covered the area.

There were no reports of injuries, the fire brigade said.

About 485 firefighters and 120 fire engines were deployed to try to tame the blaze, which was burning on several fronts. More than seven helicopters and planes were dumping water on the flames, though they had halted operations during the night for safety reasons.

“Due to the intensity and speed of the winds, the fire constantly changed direction throughout the night, which made fighting it, in the middle of the night, even more difficult,” he said.

Local authorities said the fire had burned some homes in the area of Pallini. The fire brigade would not confirm the information.

Authorities had ordered the evacuation of nine areas, including Pallini and Gerakas.

One hospital and the National Observatory of Athens had been evacuated as a precaution. Traffic was halted on roads leading to Penteli and police helped at least 600 residents to find their way out of the fire-stricken areas.

Strong winds were forecast to persist until Wednesday afternoon.

The fire brigade said that 28 firefighters from Romania were assisting local firefighters. More than 200 firefighters and equipment from Bulgaria, France, Germany, Romania, Norway and Finland will be on standby during the hottest months of July and August in Greece.

Last year, wildfires ravaged about 300,000 acres (121,000 hectares) of forest and bushland in different parts of Greece as the country experienced its worst heat wave in 30 years.