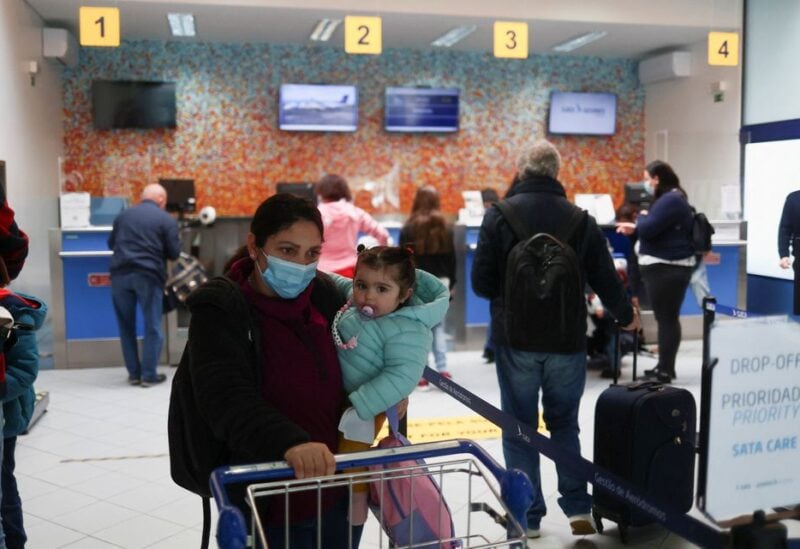 People check in at an airport to leave Sao Jorge island on the last commercial flight of the day, amid small earthquakes recorded in the area, in Velas, Azores, Portugal, March 26, 2022.

A retired couple had their picture taken outside their beloved house before leaving Sao Jorge, an island in Portugal’s Azores that is bracing for disaster after a series of minor earthquakes.

Fatima and Antonio Soares, both in their 70s, decided to leave their home on Saturday, along with dozens of other residents, a week after thousands of tremors began to shake the volcanic, mid-Atlantic island.

Seismologists are concerned that the more than 12,700 tremors, which have a magnitude of up to 3.3, will cause a volcanic eruption or a powerful earthquake.

“I asked the taxi driver to please take a picture of us because I don’t know if my house will look the same when I come back,” Fatima said as the couple waited at Sao Jorge’s airport for a flight to the nearby island of Terceira.

“Tears started to fall straight away,” she said.

The couple, who were on the island when a big quake struck in 1964, are staying at a small hotel for the time being but hope to return to their island, home to around 8,400 people, as soon as possible.

“Leaving our house at this age is hard,” Antonio said.

Dozens of other Sao Jorge residents also left early on Saturday, with the latest government figures showing about 1,250 people left the island on March 23 and March 24 alone.

The region’s CIVISA seismo-volcanic surveillance centre raised the volcanic alert to Level 4 on Wednesday, meaning there is a “real possibility” the volcano could erupt for the first time since 1808.

He thinks the current situation could drag for months.

CIVISA said there was “no evidence that a volcanic eruption was imminent” but said such a scenario could not be discounted. The number of earthquakes remains above normal levels, it said.

The island’s ports said on Saturday they were preparing in case of a natural disaster, and authorities are drawing up plans to keep livestock and other animals safe.

Care home residents and those hospitalised in the municipality of Velas, where the majority of the seismic activity has been recorded, have already been transferred to the other side of the island.