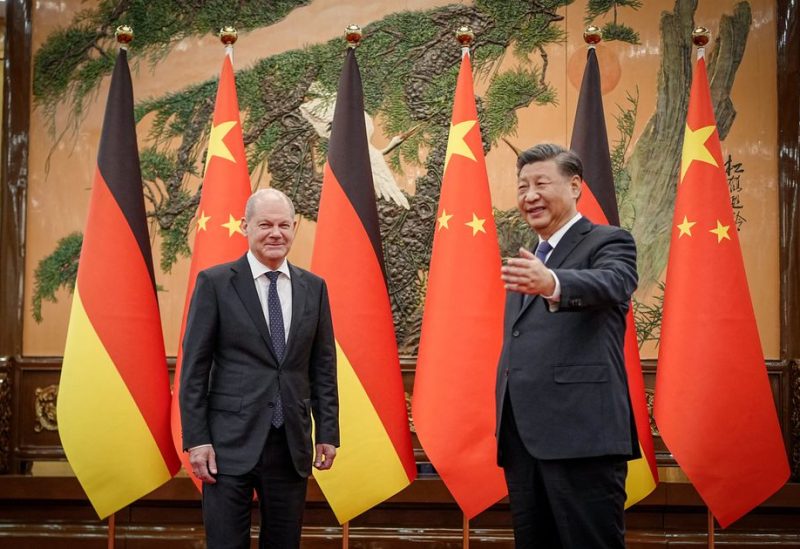 The first G7 leader to visit China since the COVID outbreak started, German Chancellor Olaf Scholz, and Chinese President Xi Jinping met on Friday. Xi Jinping spoke of the ease with which political trust between nations can be shattered.

According to observers, Scholz’s one-day visit is a test of relations between China and the West following years of escalating hostilities, with discussions including the Russian invasion of Ukraine, climate change, and reciprocal market access.

During lunch with Scholz, Xi stressed that it is easy to destroy political trust but difficult to rebuild it and both sides need to take care of it, according to a readout of the meeting from the state-run Xinhua News agency.

Xi also told Scholz that China and Germany should respect each other and take care of each other’s core interests, according to Xinhua.

Earlier while greeting Scholz at the Great Hall of the People in the heart of Beijing, Xi urged the two countries to work more closely on international issues.

“As large and influential countries, in times of change and turmoil China and Germany should work together all the more, to make more contributions to world peace and development”, Xi said, according to state broadcaster CCTV.

“At present, the international situation is complex and volatile,” he said.

Before their lunch meeting, Scholz told Xi that it was good both leaders were meeting in person during tense times, and said Russia’s invasion of Ukraine was creating problems for the rules-based global order, according to a recording of the remarks provided by the German delegation.

Scholz then met with outgoing premier Li Keqiang later in the afternoon, where he told Li that it was clear China and Germany were no friends of “decoupling”.

During a news conference after his discussion with Li, Scholz said he raised the issue of Taiwan. China claims the island as its own territory and has never renounced the use of force to bring it under its control.

“Like the U.S. and other countries, we are pursuing a one-China policy. But I have made equally clear that any change in Taiwan’s status quo must be peaceful or by mutual consent,” he said.

Scholz and the delegation of German business leaders flying with him were administered COVID-19 tests upon landing in Beijing on Friday morning, with Chinese medical staff donning hazmat suits went into the plane to conduct the tests, according to the Reuters reporter accompanying the delegation.

The delegation was moved from the airport to a state guesthouse to await their results, which Scholz quickly cleared, according to his press team.

Members of the German embassy in Beijing who come into contact with the delegation will have to undergo standard quarantine procedures, seven days in a hotel followed by three days at home, according to government sources.

China’s strict zero-COVID policy and growing tensions with the West have made it unfeasible for leaders of major western powers to visit China, while Xi only resumed foreign trips in September.

Since the conclusion of the 20th National Congress of the ruling Communist Party last month, several foreign leaders have visited China and been given exemptions to the strict COVID curbs by being placed in “bubbles” to minimise the chances of COVID cases being imported into Beijing.

Scholz’s visit is likely a welcome development for the Chinese leadership, who will be looking to shore up relations with the outside world.

“China, in the present domestic and international environments, requires his visit and whatever both sides would jointly declare in Beijing, especially shortly after the (Party) Congress,” said Shi Yinhong, a professor of international relations at Renmin University in Beijing.

Amid historic inflation and a looming recession in Germany, Scholz will be looking to emphasise the need for continued cooperation with China.

In the run-up to the visit, there had been criticism of the visit within the EU and the German government coalition, mainly from the Green Party and the Liberals.

These tensions were highlighted by a deal last week where Chinese shipping giant Cosco received approval from Berlin for a stake in a Hamburg port terminal despite opposition from coalition partners.

China’s crucial role in key industries from shipbuilding to electric vehicles, along with the unprecedented economic headwinds facing Germany, meant Scholz needs cooperation with China more than his predecessor Angela Merkel ever did, said Wang Yiwei, Jean Monnet Chair Professor and director of the Centre for European studies at Renmin University.

“Merkel was also quite ideological (towards China) in the beginning but then she changed her tune. Scholz has changed his tune even faster, but he does not have as solid a domestic political standing as Merkel,” said Wang.