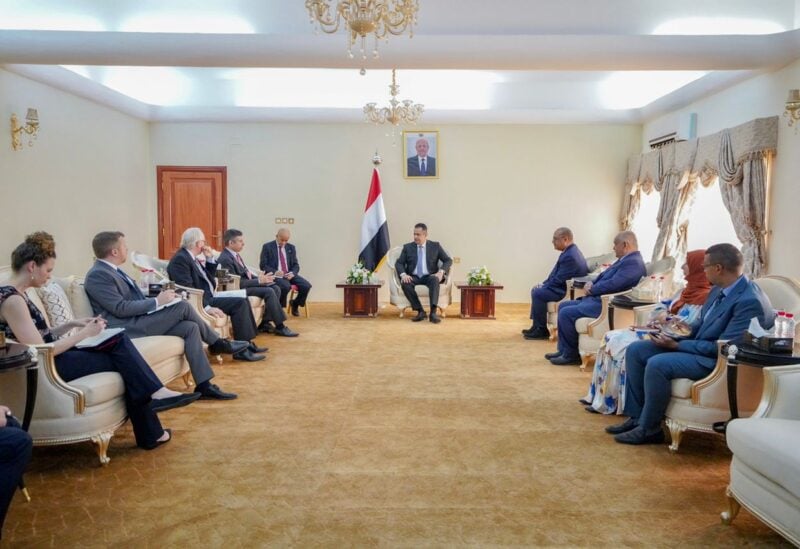 Yemen government officials hold a meeting with a US envoy ahead of the end of the two-month-long truce. (Twitter)

In a meeting with US officials on Wednesday, Yemen’s Prime Minister expressed support for prolonging a cease-fire in the war-torn country.

According to a tweet from the Yemen Prime Minister’s account, Prime Minister Dr Maeen Saeed “assured that the ambassador will receive full cooperation from the government side.”

PM @DrMaeenSaeed received today the new US Ambassador Steven Fagin and US Envoy Lenderking, praised the American role to achieve stability in #Yemen on the basis of the agreed political references, and its continued support to GoY. pic.twitter.com/vFb0q8JmLN

The US envoy was led by Ambassador to Yemen Steven Fagin and Envoy to Yemen Tim Lenderking, who expressed the “United States’ appreciation for the Government of Yemen’s support for an extension of the UN-negotiated truce,” according to a State Department statement.

Saeed also urged more pressure on the Iran-backed Houthi militia, accusing them of breaching the terms of the truce and hinting at a “disaster” if it is not renewed.

The internationally-recognized government has been fighting the Houthis since 2014, with Saudi Arabia and the United Arab Emirates’ Arab Coalition intervening the following year.

A two-month ceasefire began on April 2 and is due to end in June. It has largely held up, despite both sides accusing each other of breaking it.

One sticking point from the government’s side has been the Houthi’s blockade of the city of Taiz.

Ambassador Fagin reportedly acknowledged the “dire humanitarian situation” facing Yemenis and emphasized the urgency of international support to address these needs, according to the state department report.

A similar meeting was held with the EU in Yemen mission, who expressed their “full support” to Yemeni President Rashad al-Alimi, commending his government’s “commitment to peace” and calling for an end to the Taiz blockade, in another social media statement from the Yemeni PM.

The meetings came on the same day as a Yemeni aircraft left the Houthi-held capital Sanaa for Cairo on the first commercial flight between the two cities since 2016.

A statement from the state department spokesperson Ned Price said: “While we are encouraged by the resumption of flights from Sana’a and expanded flow of fuel into northern Yemen, there is much more work needed to improve the freedom of movement of people and goods inside Yemen, particularly to the city of Taiz, where hundreds of thousands of Yemenis have suffered for far too long.

“The truce has provided tangible relief to Yemenis, improving the lives of millions, demonstrating the benefits of peace, and giving hope that an end to this conflict is possible. The United States urges all parties to seize this pivotal moment, listen to the demands of the people, maintain support for the truce, and build towards a comprehensive peace process.”

Beyond the flights – a lifeline to Yemenis needing medical care abroad – the truce has allowed oil tankers to dock in the port of Hodeidah, potentially easing fuel shortages in Sanaa and elsewhere.

The United Nations also reported “positive” signs for renewing a truce that has eased suffering in war-torn Yemen, though there was no concrete breakthrough early Thursday, when the initial deal was set to expire, AFP reported.

On Tuesday, the United States warned the truce talks were in “trouble” as it pushed for an extension to help support millions of people at risk.

Talks on extending the ceasefire “haven’t ended yet but seem to be in a bit of trouble,” the US ambassador to the United Nations, Linda Thomas-Greenfield, said, according to an AFP report.

The war has killed more than 150,000 people and displaced millions, creating the world’s worst humanitarian crisis, according to the UN.