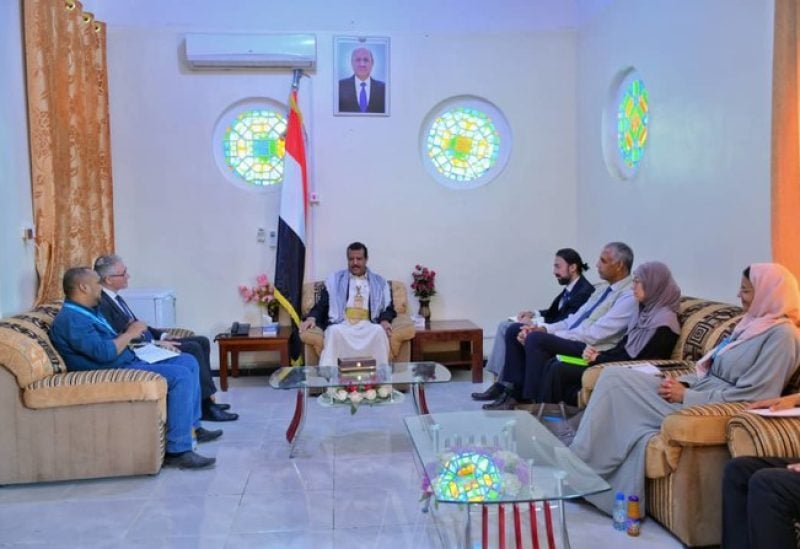 Miftah made the requests during talks with UNICEF’s representative in Yemen, Philippe Duamelle, who is on an official visit in Marib on Tuesday, according to state news outlet Saba.

Duamelle is in the Yemeni governorate to broaden partnerships with local bodies and get first-hand information on the current humanitarian situation in the war-torn city.

Miftah aims to meet health, education, water, and childhood protection needs of those living in Marib with the help and support of UNICEF.

He also expressed his appreciation for the UN organization’s significant humanitarian intervention in the governorate.

Duamelle praised the robust partnership with Marib local authority and its understanding of the growing needs of IDPs who continue to arrive in the city daily.

During the talks held with a delegation from the Hello Trust Organization, Abdulmalik called on the international community to condemn and act against the Houthi militia’s excessive use of landmines, which violates international law.

Program director Calvin Ricin, and director of the organization’s program in Yemen Abdullah al-Khasawina, also discussed demining projects focused on clearing the country from mine planted by Houthis.

Badhib, who made the appeal during a meeting with WB’s President David Malpass and governors of Arab Central Banks at the World Bank’s headquarters in Washington.

He called on the international financial institution to handle ‘grassroots of food insecurity, energy and promote investment in the infrastructure,’ state news agency Saba reported.

Badhib welcomed the WB’s decisions to re-establish its presence in Aden, and urged the entity to help develop private-owned businesses Yemen.