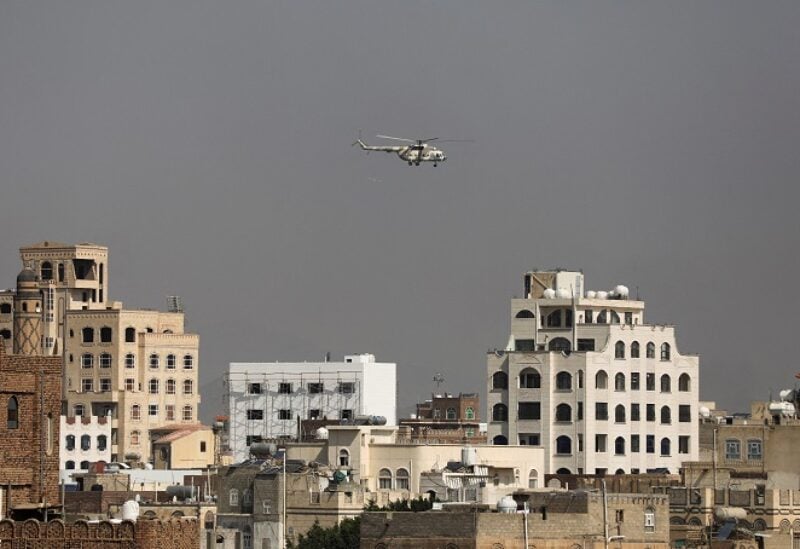 A military helicopter, operated by the Houthis, flies over Sanaa, Yemen September 21, 2022 for the first time since the Saudi-led coalition intervened in Yemen and controlled the country's airspace in 2015. REUTERS/Khaled Abdullah

UN’s special envoy to Yemen, Hans Grundberg announced that the six-month UN-backed ceasefire that had brought the longest period of relative peace to war-torn Yemen came to an end on Sunday evening, after the two sides failed to reach an agreement on extending the truce for another six months.
“The UN special envoy regrets that an agreement has not been reached today, as an extended and expanded truce would provide additional critical benefits to the population,” his office said in a statement.

Grundberg was quoted as calling on both sides — the Saudi-backed government and the Iran-backed Houthi rebels — “to fulfill their obligation to the Yemeni people to pursue every avenue for peace.”
Clashes between the two sides were already reported on Sunday as the truce extension deadline passed.

Negotiations were still ongoing to return to the ceasefire with Grundberg saying he will “continue to work with both sides to try and find solutions.”

He did not lay the blame on any particular side for the failed extension, but gave particular thanks to the Yemeni government for “engaging positively with my proposal.”

This had included increasing the number of flights from Sanaa airport and allowing more fuel ships to enter the Houthi-held port of Hodeida, currently under blockade. He also pushed for a commitment for both sides to release prisoners and resume an “inclusive” political process.

This is a modal window.The media could not be loaded, either because the server or network failed or because the format is not supported.0:00 min
A statement from the Houthis on Saturday said the ceasefire was at “a dead end.”
Despite residents in Houthi-controlled areas saying their lives had markedly improved under the truce, the Houthis blamed the government side for failing to agree on measures to “alleviate the suffering of the Yemeni people.”​​​​​​​

The first two-month ceasefire was agreed in April and subsequently extended two more times.
The conflict broke out in 2014 when the Houthis captured the capital Sanaa and large swathes of northern Yemen, forcing the government to flee into exile.

A Saudi-led coalition, with support from the UAE, then joined on the side of the government. The Houthis have since targeted Saudi and UAE oil production facilities with drone strikes.

The six-month lull in fighting eased access to humanitarian aid upon which some 23.4 million Yemenis are reliant.

The fighting in Yemen has killed hundreds of thousands of people, including many civilians, and created what the UN calls the world’s worst humanitarian crisis.