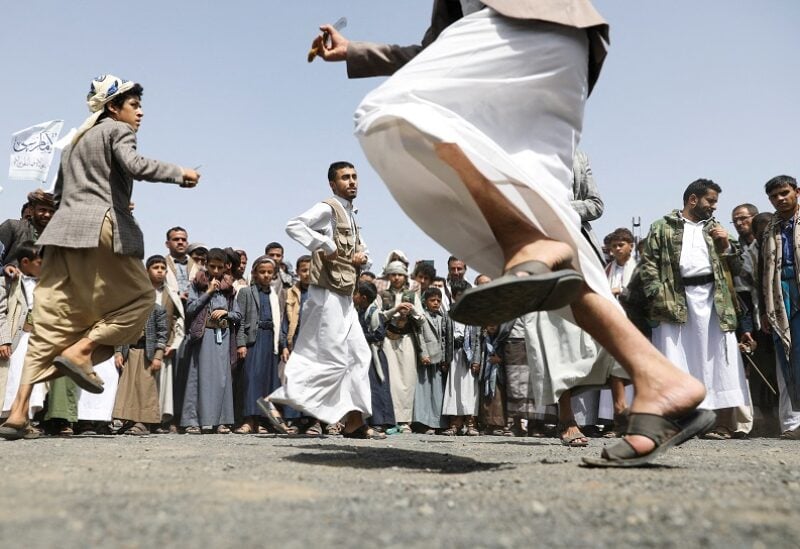 Houthi supporters perform the Baraa dance during a rally marking the Ghadeer day, a day Shi'ites believe Prophet Muhammad nominated his cousin Imam Ali to be his successor, in Sanaa, Yemen July 17, 2022. REUTERS/Khaled Abdullah TPX IMAGES OF THE DAY

The joint statement issued after Saudi-US talks on Friday and the concluding statement of the Gulf-US summit on Saturday, were welcomed by the legitimate Yemeni government, while the Iran-backed Houthi militias were apprehensive of them.
Head of the Presidential Leadership Council Dr. Rashad al-Alimi also met with US Secretary of State Antony Blinken on the sidelines of the summit.
Secretary of the Yemeni media ministry Abdulbaset al-Qaedi told Asharq Al-Awsat that the most important outcomes related to Yemen declared at the summit were the support to the Leadership Council and urging the Houthis to return to peace talks.
The summit also underscored the importance of reopening the main routes to Taiz city, which has been besieged by the Houthis since 2015.
Above all else, the Houthi reaction to the summit will be the most important, said al-Qaedi, adding that the militias have long rejected the peace process.
The militias have been violating the nationwide truce since its announcement in early April and after it was extended for another two months in June.
The Houthis have also been refusing proposals to reopen the routes to Taiz, a key demand in the ceasefire, meaning they are the real hurdle in achieving any tangible progress in Yemen, added al-Qaedi.
US interests
Yemeni analysts, meanwhile, have questioned the American intentions behind the truce. They said Washington isn’t really serious about ending the crisis as much as it is exploiting it to achieve interests related to the upcoming midterm elections.
Analyst Mahmoud al-Taher said the war in Yemen has not received the attention it deserves from the US in that it has failed to address the real causes of the conflict and ways to end it
All the Americans proposed was extending the truce, which the Houthis have not respected for three months, he told Asharq Al-Awsat.
Washington’s repeated statements over the truce and its extension reveal that it is not concerned about ending the war, but it is using it to support US President Joe Biden and his party in the midterm election, he added.
He explained that Biden is on the verge of losing the Congressional majority after his failure on all fronts, such as confronting Russia and China and in domestic affairs.
Biden has no other pledge he can claim to have fulfilled except for stopping the war in Yemen, al-Taher remarked, predicting that the conflict will heat up again after the midterms are held in November.
Houthi wariness
The Houthis were closely and warily watching the results of the Jeddah summits.
No sooner were they concluded that the militias’ ruling council issued a statement rejecting “talk of understandings over extending the truce.”
The statement also said the militias were “not pleased” with the truce in spite of the military and economic gains it helped them reap.
It said the truce was a “real shock and disappointment and cannot be repeated in the future.”
It reiterated the Houthi vision of peace in Yemen that would allow them free reign in the country, meaning having regional countries and the international community accept their coup against the legitimate government.
The militias condemned Biden’s visit to the Middle East, echoing remarks made by Iran and all of regional proxies.
Meanwhile, leading Houthi member Mohammed Ali al-Houthi, a cousin of the militias’ top leader, said the Houthis were still weighing the possibility of extending the truce.
Addressing Houth followers in Sanaa, he called on them to prepare to fight and attack liberated Yemeni regions.
He also alleged that the truce “failed to yield the desired fruit”.
“We will fight. We do not fear them and we have never feared them throughout the years,” he declared.