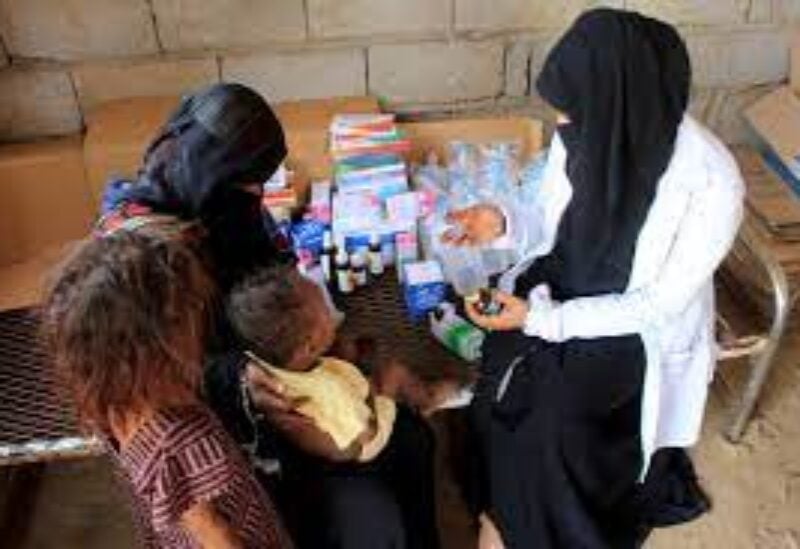 Ashwaq Mahmoud volunteers her time and money in the impoverished hamlet of Jarb in northern Yemen to offer basic health care to residents who would otherwise be unable to access or pay them.

Mahmoud, 23, was trained as a community health worker by the United Nations Children’s Fund (UNICEF) after a local elder saw her assisting displaced families from Yemen’s war frontlines.

She currently provides basic treatments as well as information on maternal health, malnutrition, and vaccines.

“Ashwaq helps us, she does not fall short. She comes to the patient, gives injections, pills, everything. She does not take a penny from us,” said Jumaa Ali Jawhar, also from Jarb in Hajjah province.

Although money is also tight for Mahmoud, her six siblings and two parents, she saved the daily stipend from her two-month UNICEF training to build a small brick room outside the family home.

This became her own mini-clinic.

“There were children and mothers suffering because the hospital is far away. The trip costs around 4,000 riyals ($7). Not all people can afford that return trip and follow-ups,” she said.

In the dirt-floor room she built, tousle-haired youngsters and women now crowd, weighing their toddlers for signs of the hunger that stalks large swathes of Yemen’s children.

“People come and I give them what they need, if I have it. I give them Paracetamol, folic acid, iron. I take malnutrition measurements for children. I refer those with acute malnutrition, diarrheas’, vomiting or fever to hospital,” said Mahmoud, who gets a small monthly wage around $80 from UNICEF.

Mahmoud’s work is not easy.

She walks long distances through fields from house to house to check on families and report back to UNICEF. It is a constant struggle to keep stocks of medical supplies, which she gets from UNICEF, charities and even from her own money.

“A sick child comes, or you visit him, and you see his condition. Of course, the parents want something from you, but I don’t have anything to give them. So I have to refer them (to a health centre), but they don’t have money for transport,” Mahoud said.

Yemen’s six-year-old war has cause a hunger crisis and devastated health services. Rural areas like Mahmoud’s have been hit particularly hard.

Noting her efforts, a local medical college in Abs has given her a scholarship to become a medical assistant.

“She serves the community, and we are very proud of her. We also ask organizations and people to support her more,” he said.