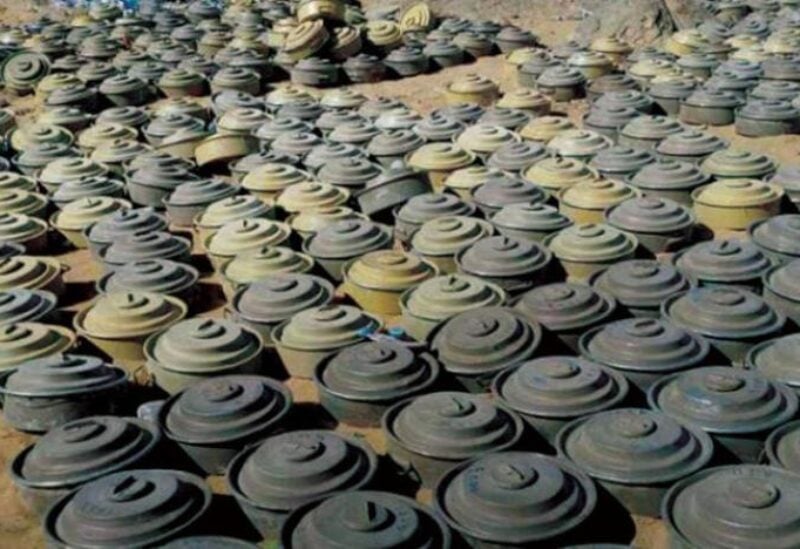 Houthi mines removed by the Masam project in Yemen. (Saba)

Director of Yemen’s National Mine Action Program, Brigadier General Amin Al-Aqili accused the Iran-backed Houthi militias of continuing to plant mines in the war-torn country, saying the disaster they have created will take decades to resolve.

The Houthis have continued to plant the explosives in spite of the ongoing nationwide truce, he added, while noting that government estimates that the militias have planted over a million mines in Yemen.

He reiterated the call on the international community to pressure the Houthis to stop this malicious activity and hand over maps of where they planted the mines.

He stressed that the Houthis are systematically planting the mines and have accurate maps of their locations.

Moreover, the militias are still locally manufacturing the explosives, the parts of which are being smuggled from Iran, Aqili remarked.

Furthermore, he warned that the recent flooding in Yemen had displaced mines, urging citizens to exercise caution and inform authorities if they come across any suspicious object.

The floods have displaced mines in several regions in the Marib, Jawf, Shabwah, Taiz and Dhale provinces.

Aqili said efforts are ongoing to rid Yemen of the mines. Such work does not get suspended during a truce or peace, he added.

The threat of the mines will remain for dozens of years, even if the war were to end and the Houthis were to stop planting them, he lamented.

He hailed the efforts of Saudi Arabia’s Masam project that is dedicated to removing the mines.

Masam dismantled, during the third week of August, a total of 921 mines planted by the Houthis across Yemen, including 51 anti-personnel mines, 276 anti-tank mines, 590 unexploded ordnance and four explosive devices.

It has dismantled a total of 354,857 mines that have been arbitrarily planted by the militias.