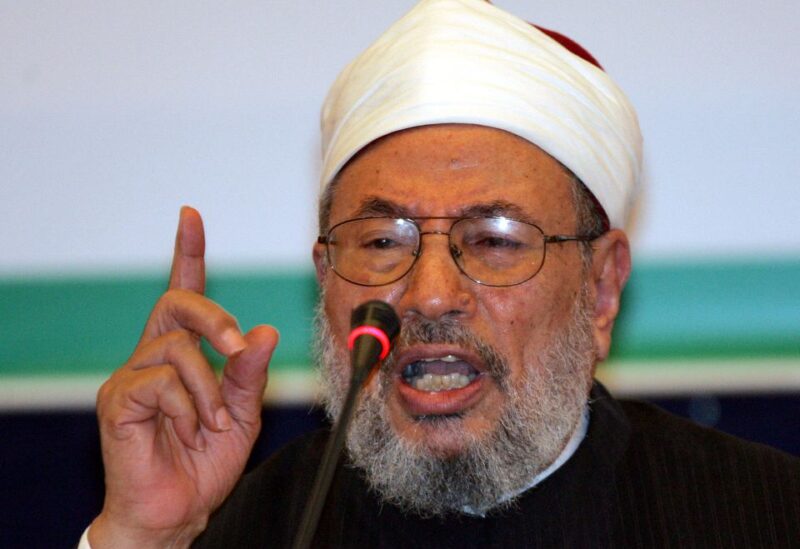 Yusuf Al-Qaradawi, Egypt’s outlawed Muslim Brotherhood spiritual leader who died on Monday at the age of 96, leaving behind a poisonous legacy of hatred and Islamic domination.

Al-Qaradawi was the first head of the International Union of Muslim Scholars, a position he held for 14 years, beginning in 2004.

More importantly, he was one of the fountainheads of the Muslim Brotherhood, a religious-political organization that has been sanctioned and proscribed by Gulf states and many Western countries.

Founded in 1928, the Brotherhood established itself in the mid-20th century as the main opposition movement in Egypt, as well as in other countries in the region. Cairo blacklisted the movement as a terrorist organization in 2013.

A BBC News website report of 2004, quoting an Arabic-language website, said Al-Qaradawi was born in a small village in the Nile Delta in 1926 and studied Islamic theology at Al-Azhar University in Cairo, from where he graduated in 1953.

Between 1949 and 1961, he was imprisoned several times in Egypt over his links to the Muslim Brotherhood and accusations that he ordered the assassination of political figures.

The Brotherhood’s followers were seen across the Islamic world as fanning religious hatred and promoting a cult of violence in order to achieve political power.

In a 2019 tweet, Al-Qaradawi claimed he was not a preacher of hate and that he had spent the past 25 years promoting moderate thought.

“I stood against extremism and extremists for approximately a quarter of a century. I saw its threat to deen and dunya (religion and the temporal world), on the individual and society, and I have reinforced my pen, tongue and thought (to support) the call for moderation and reject exaggeration and negligence, either in the field of fiqh and fatwa (Islamic jurisprudence and legal pronouncement in Islam) or in the field of tableegh and da’wah (guidance and preaching),” he tweeted at the time.

However, his track record revealed exactly the opposite. He justified suicide bombings, especially in Palestine, repeatedly spoke out against Jews as a community, and issued fatwas (religious edicts) that demean women.

In a fatwa on his website, he stated that martyrdom is a higher form of jihad. And in a notorious 2004 interview on the BBC’s Newsnight program, he praised suicide bombings in Israeli-occupied Palestine as martyrdom in the name of God.

“I supported martyrdom operations, and I am not the only one,” he said.

He also encouraged Muslims who were unable to fight to financially support mujahideen (those engaged in jihad) everywhere in foreign lands. This could hardly be described as a stand against terrorism.

In 2008, he was refused a visa by the UK Home Office to visit the country to receive medical treatment. David Cameron, the former Conservative Party leader, described Al-Qaradawi as “dangerous and divisive” in his appeal to the government to reject the visa application.

The Home Office said: “The UK will not tolerate the presence of those who seek to justify any acts of terrorist violence or express views that could foster inter-community violence.”

Al-Qaradawi became a familiar name in Arabic-speaking Muslim communities with his weekly appearance on the religious phone-in program Al-Shariah wa Al-Haya (Islamic Law and Life), that was broadcast to millions worldwide.

Al-Qaradawi issued fatwas authorizing attacks on all Jews. On Al Jazeera Arabic in January 2009, he said: “Oh God, take Your enemies, the enemies of Islam … Oh God, take the treacherous Jewish aggressors … Oh God, count their numbers, slay them one by one and spare none.”

He held a similar disdain and deep-seated hatred of Europeans. That Al-Qaradawi was an Islamic supremacist with a total disregard for European civilization and culture could be gauged from one of his lectures on Qatar TV in 2007.

“I think that Islam will conquer Europe without resorting to the sword or fighting. Europe is miserable with materialism, with the philosophy of promiscuity and with the immoral considerations that rule the world — considerations of self-interest and self-indulgence,” he said.

“It’s high time (Europe) woke up and found a way out from this, and it won’t find a lifesaver or a lifeboat other than Islam.”

On his show in 2013, Al-Qaradawi blasted Muslim countries as weak, and called on citizens to overthrow their governments and launch a war against all who oppose the Brotherhood, describing them as “khawarij” (enemies of Islam).

Many intellectuals and commentators in the Arab world viewed his lectures as dangerous regurgitation of Islamist dogma out of touch with the modern world.

When an uprising began in Egypt against the rule of long-time President Hosni Mubarak, Al-Qaradawi supported the protesters in his TV broadcasts and issued an edict forbidding security personnel from opening fire on them.

Upon his return to Egypt in 2011, he began to lead Friday prayers for hundreds of thousands of people in Tahrir Square a week after Mubarak’s resignation.

“Don’t let anyone steal this revolution from you — those hypocrites who will put on a new face that suits them,” he told the crowd.

However, Al-Qaradawi was forced again into exile in 2013 when the military overthrew Mubarak’s successor Mohammed Morsi, a Muslim Brotherhood loyalist, following mass protests against his policies.

Al-Qaradawi condemned what he described as a “coup” and appealed to all groups in Egypt to restore Morsi to what he called his “legitimate post.”

Al-Qaradawi was sentenced to death in absentia by an Egyptian court in 2015 alongside other Brotherhood leaders.