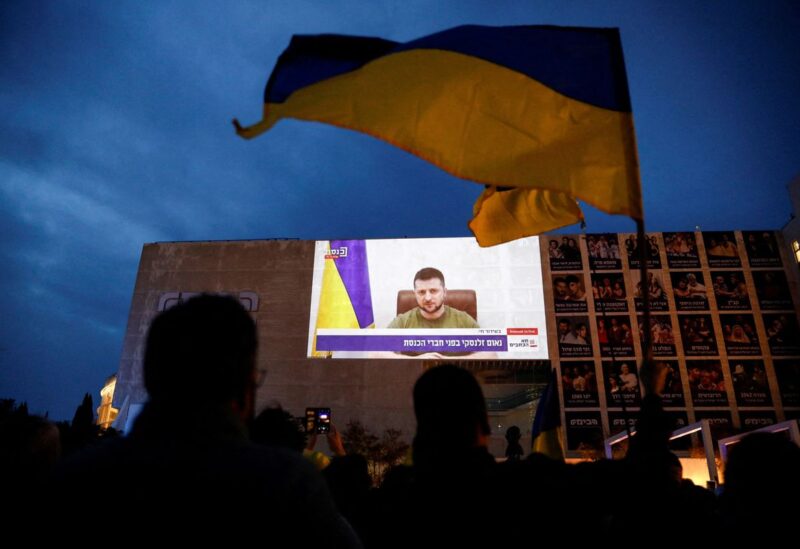 Demonstrators gather in support of Ukraine following Russia's invasion, and watch Zelenskiy's speech as it is broadcasted to the Knesset, Israel's parliament, and projected at Habima Square in Tel Aviv, Israel, March 20, 2022. REUTERS/Corinna Kern/File Photo

Ukrainian President Volodymyr Zelenskiy said he was “in shock” at Israel’s failure to give Kyiv anti-missile systems to help counter Russian attacks, according to an interview made public on Saturday.

Zelenskiy has been asking for the weapons since shortly after the war started in February. He has mentioned Israel’s Iron Dome system, often used to intercept rockets fired by Palestinian militants in Gaza.

“I don’t know what happened to Israel. I’m honestly, frankly – I am in shock, because I don’t understand why they couldn’t give us air defences,” he said.

Zelenskiy made the remarks in an interview with French reporters on Wednesday. His office released a recording of the interview on Saturday.

Zelenskiy’s comments were stronger than those he made in March, when he chided Israel for its reluctance to send weapons. At the time, Israel was non-committal, saying it would help Ukraine as much as it could.

Israel, which has condemned the Russian invasion, is wary of straining ties with Moscow, a powerbroker in neighbouring Syria where Israeli forces frequently attack pro-Iranian militia.

“I understand – they have a difficult situation, regarding the situation with Syria and Russia,” Zelenskiy said, adding that he was not making accusations.

“I am stating the facts. My conversations with the Israeli leadership have done nothing to help Ukraine.”