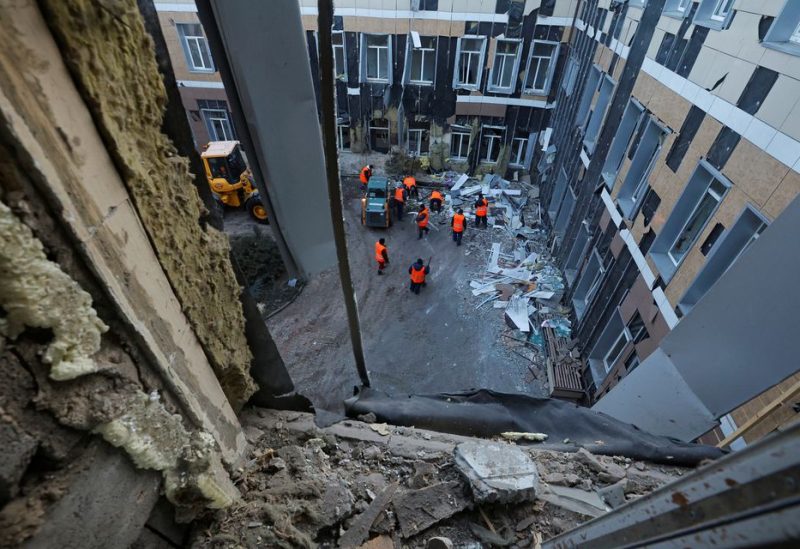 Workers remove debris outside a hospital damaged by recent shelling in the course of Russia-Ukraine conflict in Donetsk, Russian-controlled Ukraine, December 20, 2022. REUTERS/Alexander Ermochenko

Russian President Vladimir Putin referred to the situation in the regions of Ukraine that his country controls as being “extremely difficult,” and his Ukrainian counterpart emphasized this point by traveling to a frontline town that Russia has long attempted to seize but has been unable to do so.

In a speech to Russia’s security agencies, Putin instructed agents that they needed to dramatically improve their performance. It was one of his most blatant public admissions yet that the invasion he initiated some 10 months ago is not going as he had intended.

It followed a visit to close ally Belarus that fuelled fears, dismissed by the Kremlin, that the country could help Russia open a new invasion front against Ukraine.

Some of the fiercest fighting in recent weeks in Ukraine has taken place around the eastern city of Bakhmut. Ukrainian President Volodymyr Zelenskiy’s office said on Tuesday he had visited the city to meet military representatives and hand out awards to soldiers.

Putin ordered the Federal Security Services (FSB) to step up surveillance of Russian society and the country’s borders to combat the “emergence of new threats” from abroad and traitors at home. Western countries have imposed unprecedented sanctions on Russia and the rouble slumped to an over seven-month low against the dollar on Tuesday after the European Union agreed to cap prices of gas, a major Russian export.

In a rare admission of the invasion of Ukraine not going smoothly, Putin cautioned about the difficult situation in regions of Ukraine that Moscow moved to annex in September and ordered the FSB to ensure the “safety” of people living there.

“The situation in the Donetsk and Luhansk People’s Republics, in the Kherson and Zaporizhzhia regions is extremely difficult,” Putin said in a video address to security workers translated by Reuters.

In September, Putin sought to regain the initiative after a series of battlefield defeats by declaring that four partially occupied regions in Ukraine’s east and south had joined Russia. Kyiv and its Western allies said the move was illegal.

In October, Russian forces drew back in one of the regions – Kherson – and dug in elsewhere. They have failed to gain ground and earlier this month, Putin said the war could be a “long process”.

On Monday, Putin made his first visit to Belarus since 2019, where he and his counterpart extolled ever-closer ties at a news conference late in the evening but hardly mentioned Ukraine. On Tuesday, Russian news agencies reported that Belarus had reached an understanding with Moscow on the restructuring of its debt and had agreed on a fixed price for Russian gas for three years.

Kyiv, meanwhile, was seeking more weapons from the West after weeks of attacks on energy facilities which have knocked out both power and water supplies amid freezing temperatures.

“Weapons, shells, new defence capabilities … everything that will give us the ability to speed up the end to this war,” elenskiy said in his evening address.

Ukraine’s military said it had shot down 30 of 35 “kamikaze” drones fired by Russia on Monday, mostly at the capital Kyiv. The unmanned aircraft fly towards their target, then plummet and detonate on impact.

Ukrainian officials said on Tuesday that five people had been killed in the eastern Donetsk and southern Kherson regions, with eight wounded, and that 21 missiles had knocked out power in the southern city of Zaporizhzhia.

To the northwest of Ukraine, there has been constant Russian and Belarusian military activity for months in Belarus, which Moscow’s troops used as a launch pad for their abortive attack on Kyiv in February.

Lukashenko has said repeatedly he has no intention of sending his country’s troops into Ukraine. But the commander of Ukraine’s joint forces, Lieutenant General Serhiy Nayev, said his country was prepared.

“The level of the military threat is increasing, but we are taking adequate measures,” he was quoted as saying by the defence ministry on Telegram. “The Armed Forces’ General Staff provides for the expansion of units in the event of a significant increase in the other side’s forces.”

The Kremlin on Monday dismissed the suggestion that Putin wanted to push Belarus into a more active role. The RIA Novosti news agency quoted Kremlin spokesperson Dmitry Peskov as saying such reports were “groundless” and “stupid”.

Both Putin and Lukashenko were also at pains to dismiss the idea of Russia annexing or absorbing Belarus.

“Russia has no interest in absorbing anyone,” Putin said.

Asked about this comment, U.S. State Department spokesperson Ned Price said it should be treated as the “height of irony”, given it was “coming from a leader who is seeking at the present moment, right now, to violently absorb his other peaceful next-door neighbour.”

The 10-month-old conflict in Ukraine, the largest in Europe since World War Two, has killed tens of thousands of people, driven millions from their homes and reduced cities to ruins.

Ukraine’s General Staff said Russian artillery hammered 25 towns and villages around Bakhmut and Avdiivka in the east and several areas around Kupiansk, a northeastern town retaken by Ukraine in September.

Alexei Kulemzin, the Russian-installed mayor of the city of Donetsk, said Ukrainian shelling hit a hospital wing, along with a kindergarten, posting on Telegram a photo of what appeared to be a waiting room with smashed furniture and fittings.

Reuters could not independently verify the battlefield accounts of either side.

Russia says it is waging a “special military operation” in Ukraine to rid it of nationalists and protect Russian-speaking communities. Ukraine and the West describe the Kremlin’s actions as an unprovoked war of aggression.