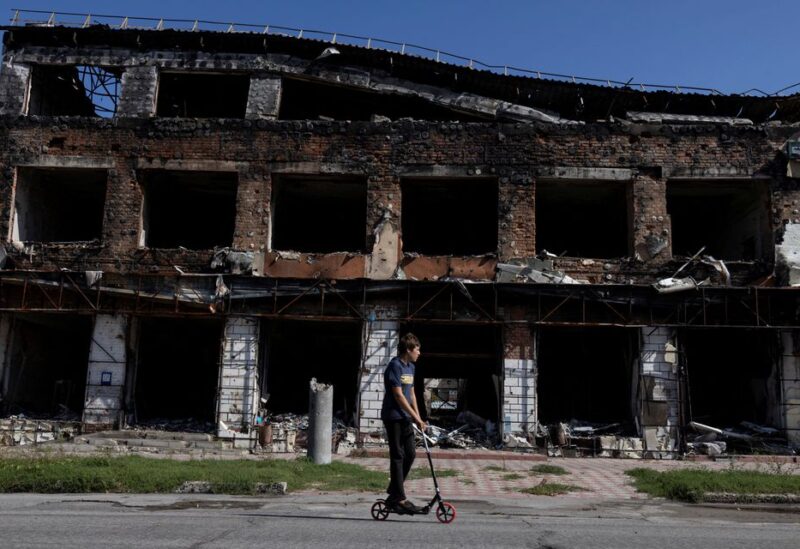 A boy rides his scooter past a destroyed building, as Russia's attack on Ukraine continues, in the town of Izium, recently liberated by Ukrainian Armed Forces, in Kharkiv region, Ukraine September 18, 2022. REUTERS/Umit Bektas

President Volodymyr Zelenskiy said that Ukraine’s effort to reclaim its territory would not be slowed, as Kyiv announced that its troops had crossed the Oskil River, ready for an assault on Russia’s occupying forces in the eastern Donbas region.

Reflecting the remarkable shift in momentum since Ukrainian forces routed Russian troops in the northeast earlier this month, US President Joe Biden issued his clearest prediction yet that Ukraine would win the war.

Victory would come only when Russian forces were completely driven from Ukrainian territory, and the United States would support Ukraine “as long as it takes”, Biden said.

“Russia’s turning out not to be as competent and capable as many people thought they were going to be.”

Crossing the Oskil River is another important milestone in Ukraine’s counter-offensive in the northeastern Kharkiv region. The river flows south into the Siversky Donets, which snakes through the Donbas, the main focus of Russia’s invasion.

Further beyond lies Luhansk province, base for Russia’s separatist proxies since 2014 and fully in Russian hands since July after some of the war’s bloodiest battles.

Ukrainian troops “have pushed across the Oskil. From yesterday, Ukraine controls the east bank”, the Ukrainian Armed Forces wrote on Telegram late on Sunday.

Serhiy Gaidai, Ukrainian governor of Luhansk, wrote on Telegram: “Luhansk region is right next door. De-occupation is not far away.”

Ukrainian forces swept through the Kharkiv region this month after bursting through the front line, sending thousands of Russian troops fleeing and abandoning their tanks and ammunition. In recent days, the pace of the Ukrainian advance has again slowed, but Zelenskiy said this was only because the forces were consolidating and preparing for further offensives.

“Perhaps it seems to some of you that after a series of victories we now have a lull of sorts,” he said in his regular nightly address on Sunday. “But there will be no lull. There is preparation for the next series … For Ukraine must be free. All of it.”

A blast occurred 300 metres (yards) away from the reactors and damaged power plant buildings shortly after midnight, Ukraine’s atomic power operator Energoatom said in a statement. The reactors were not damaged and no staff were hurt, it said, publishing photographs showing a huge crater it said was caused by the blast.

“The invaders wanted to shoot again, but they forgot what a nuclear power plant is,” Zelenskiy said in a social media post. “Russia endangers the whole world. We have to stop it before it’s too late.”

The strikes could add to global concern over the potential for an atomic disaster, already elevated over the fate another Ukrainian nuclear power plant, Zaporizhzhia, captured by Russian forces near frontlines in March. Moscow has ignored international calls to withdraw and demilitarise it.

Since its forces were driven out of Kharkiv, Russia has repeatedly fired at power plants, water infrastructure and other civilian targets in what Ukraine says is retaliation for defeats on the ground. Moscow denies deliberately targeting civilians.

Russia’s rapid losses over the past few weeks have shaken a Kremlin public relations campaign that has never veered from the line that the “special military operation” is “going to plan”.

Officially Russia announced it was moving some troops out of the Kharkiv region to regroup elsewhere. But the losses are being openly acknowledged on state television, usually by commentators calling for escalation.

Alla Pugacheva, Russia’s most celebrated pop diva since the Soviet era, became by far the biggest mainstream cultural figure to oppose the war, with a post on Instagram denouncing “the death of our guys for illusory goals that are turning our country into a pariah and worsening the lives of our citizens”.

Pugacheva, 73, asked to be declared a “foreign agent” – a legal definition the Russian authorities impose on Kremlin critics, including her husband, a comedian who hosted Russia’s version of “Who Wants to Be Millionaire”.

Russian President Vladimir Putin met the leaders of China and India at a summit last week and acknowledged their “concerns” over the conflict, a rare nod to friction with the Asia powers he has turned to amid a total break with the West.

He belittled the Ukrainian advance: “The Kyiv authorities announced that they have launched and are conducting an active counteroffensive operation,” he said with a grin at Friday’s summit. “Well, let’s see how it develops, how it ends up.”

As Ukraine’s forces have advanced into formerly Russian occuped territory, they have uncovered what they describe as evidence of atrocities committed by Russian troops, including a huge mass burial site near the city of Izium.

On Saturday, Zelenskiy said authorities had found a mass grave containing the bodies of 17 soldiers in Izium, some of which he said bore signs of torture.

Volodymyr Kolesnyk stepped between numbered wooden crosses looking for the bodies of his aunt, his cousin and his cousin’s wife, killed in an air strike on an apartment building shortly before Izium fell to Russian forces in April.

“They buried the bodies in bags, without coffins, without anything. I was not allowed here at first. (The Russians) said it was mined and asked to wait. And there was a lot of them in the woods, so it was scary to come here,” Kolesnyk told Reuters.

In London, Ukrainian Prime Minister Denys Shmyhal and First Lady Olena Zelenska arrived to attend the funeral of Britain’s Queen Elizabeth II. Russia was banned from the ceremony along with its ally Belarus.