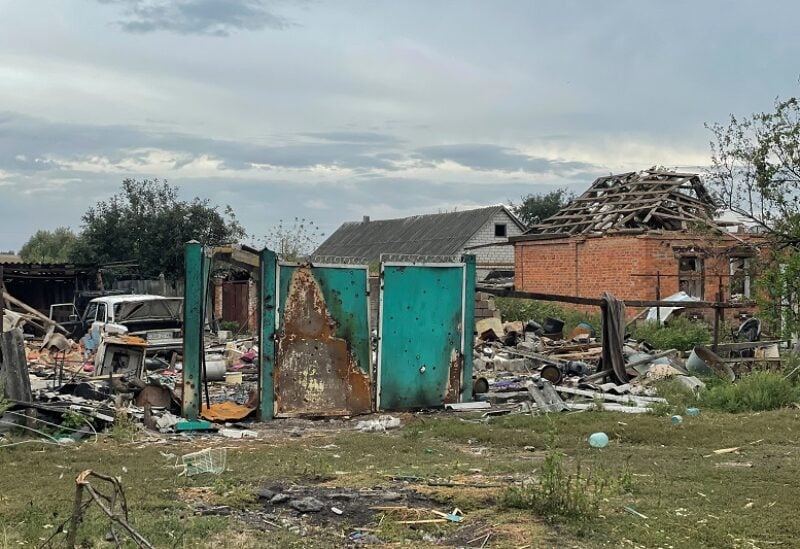 A view shows a residential house damaged by a military strike in the village of Udy recently liberated by the Ukrainian Armed Forces during a counteroffensive operation, amid Russia’s attack on Ukraine, in Kharkiv region, Ukraine September 12, 2022. Press service of the National Police of Ukraine/Handout via REUTERS ATTENTION EDITORS - THIS IMAGE HAS BEEN SUPPLIED BY A THIRD PARTY.

President Volodymyr Zelensky is claiming that his forces have captured as much as 6,000 square kilometres of territory from Russia, since the beginning of the month, After Russia pulled back from the Kharkiv region of Ukraine on Saturday.
“Since the start of September, our soldiers have already liberated 6,000 square kilometres of Ukrainian territory in the east and south, and we are moving further.” said Zelensky in his briefing.

Additionally, several reports have claimed that Ukrainian troops are banging on the Russian border, having liberated one village after another near the areas.

“In some areas of the front, our defenders reached the state border with the Russian Federation.” Oleh Syniehubov, the regional governor of the north-eastern Kharkiv region was quoted as saying.

Oleh, without specifying the exact numbers stated that Russian Prisoners of War (POW) had been arrested and would be exchanged for Ukrainian service members captured by Russia.

Meanwhile, liberated residents of Zaliznychne, a small town near the eastern frontline claimed that Russians whisked off here in haste in the afternoon.

“The Russians were here in the morning. Then at noon, they suddenly started shouting wildly and began to run away, charging off in tanks and armoured vehicles,” a resident was quoted as saying by Sky News.

An upbeat Zelensky, elated at the supposed advances by his army has called upon the West once again to support Ukraine. Furthermore, the Ukrainian President has been taking shots at the Russian troops from their pullback.

“These days, the Russian army is showing its best showing its back. And, in the end, it is a good choice for them to run away. There is and will be no place for the occupiers in Ukraine,” he said in a video post on Facebook.

Since bursting through the frontline earlier this week, Ukrainian forces have recaptured dozens of towns and villages held by Russia for months.

Marking Russia’s biggest battlefield defeat since its forces were forced to abandon their assault on the capital Kyiv in March, the claim of pullback to concentrate on Donetsk is similar to the justification given by Kremlin for Ukraine’s capital.