Zelensky in US Congress: Ukraine is ‘alive and kicking’, will ‘never surrender’ to Putin 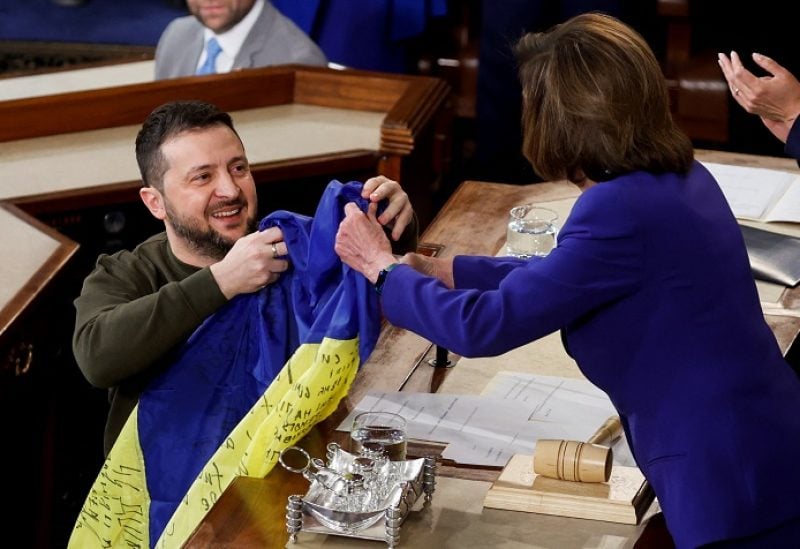 Ukraine's President Volodymyr Zelenskiy presents a Ukrainian flag given to him by defenders of Bakhmut to U.S. House Speaker Nancy Pelosi (D-CA) during a joint meeting of U.S. Congress in the House Chamber of the U.S. Capitol in Washington, U.S., December 21, 2022. REUTERS/Jonathan Ernst

Unfurling the Ukrainian battle flag in the end and evoking the analogy of ongoing war in Ukraine with second world war’s ‘Christmas of 1944’, Ukraine’s President Volodymyr Zelensky became an ever-present figure on television screens worldwide as he addressed the US Congress on December 22. In a speech that lasted about 25 minutes, Zelensky’s passionate pleas for the US and larger global support for Ukraine during the ongoing war were often mixed with doses of humour. “Ukraine is alive and kicking,” Zelensky told the US Congress, receiving thunderous applause in return.
Just like the “brave American soldiers which held their lines” and fought against Hitler’s Nazi Germany in 1944, Ukrainian soldiers “are doing the same to Putin’s forces this Christmas,” Zelensky said to applause.
Sporting his signature olive green outfit with Ukrainian military insignia, Zelensky received triumphant cheers with bereft whistles typically reserved for a celebrity in a concert. But far from the frontline of war, in the power corridor of Washington’s Capitol Hill, Zelensky appealed to the lawmakers and American citizens to continue supporting Ukraine during the ongoing war in his country.
“Your money is not charity, it’s an investment in the global security and democracy that we handle in the most responsible way,” Zelensky said during his address to a joint session of the US Congress.
“Against all odds and doom and gloom scenarios, Ukraine didn’t fall. Ukraine is alive and kicking,” Zelensky said.
In his address, Zelensky said that US President Joe Biden supported his 10-point peace plan.
“We need peace. Yes. Ukraine has already offered proposals, which I just discussed with President Biden, our peace formula. The10 points which should and must be implemented for our joint security. I am glad to share that President Biden supported our peace initiative today. Each of you, ladies and gentlemen, can assist in the implementation to ensure that Americans leadership remains solid, bicameral. and bipartisan,” Zelensky said.
“You can strengthen sanctions to make Russia feel how ruinous its aggression truly is. It is in your power, really, to help us bring to justice everyone who started this unprovoked and criminal war. Let’s do it,” said Zelensky, adding that only justice against the Russian aggression will compensate for all losses done by the war.
In a comment whose resonance was reflected in strong returning applause from the American Congressmen sitting in the reception of the Ukrainian president, Zelensky said that while Ukraine will continue its effort to “defeat the Kremlin on battlefield”, the Russians will stand free “if they defeat the Kremlin in their mind”.
Hitting out at Iran’s coveted support to Russia on the battlefield, Zelensky said that Iranian drones are a threat to Ukraine’s critical infrastructure and that they must be stopped with an immediate sense of urgency.