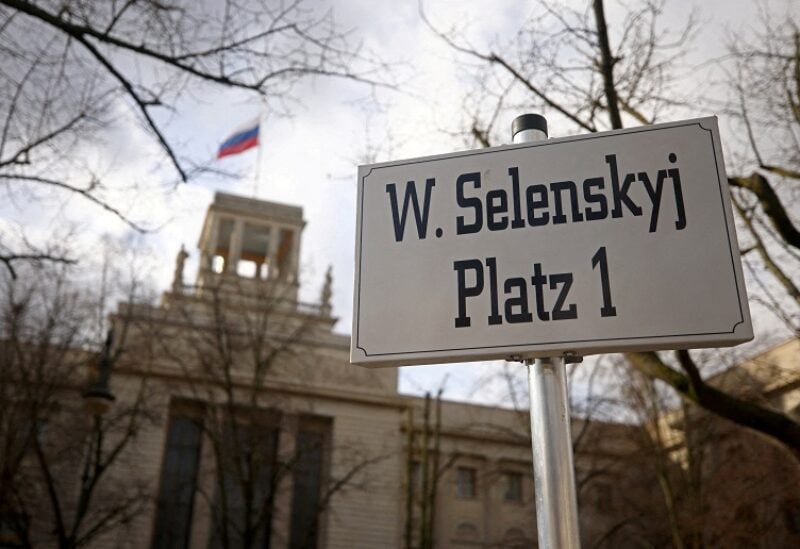 FILE PHOTO: A sign with the name of Ukraine's President Volodymyr Zelenskiy is set up in front of the Russian embassy, as Russia's invasion of Ukraine continues, in Berlin, Germany April 5, 2022. REUTERS/Lisi Niesner/File Photo

“We invite partner countries to sign a multilateral agreement and create a mechanism ensuring that everybody who suffered from Russian actions can receive compensation for all losses incurred,” said Ukrainian President Volodymyr Zelensky, in an attempt to show nations planning aggressive acts that they would have to pay for their actions

In his video address, he said,He added that Russia is trying to destroy as much of Ukraine’s infrastructure as it can and that under such a deal, Russian funds and property in signatory nations would be confiscated.
Highlighting the redirection of confiscated funds and property to a special compensation fund, Zelensky said “That would be fair as Russia will feel the weight of every missile, every bomb, every shell which it has fired at us.”

Describing the bombardment of Severodonetsk as “brutal and absolutely pointless”, Zelensky said, “There’s hell, and that’s not an exaggeration.”

Marking an end to a weeks-long siege, Russia’s defence ministry said the last group of Ukrainian forces holed up in Mariupol’s Azovstal steelworks had surrendered.