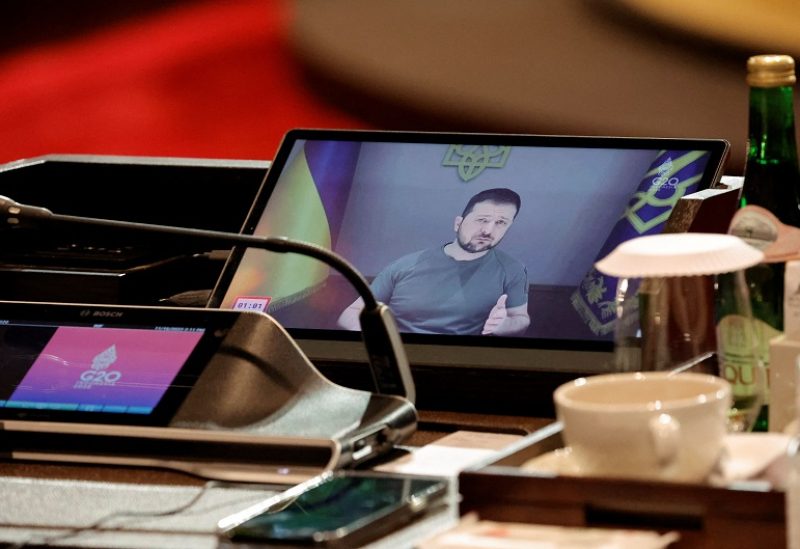 Accusing Russia of a missile strike on Poland that killed two people, Ukrainian President Volodymyr Zelenskyy on Wednesday told G20 leaders there was a “terrorist state” among them.

Speaking by video link, Zelenskyy called the strike “a true statement brought by Russia for the G20 summit.”

He addressed the G20 summit for the second time, but several leaders had already departed the Indonesian island of Bali, which hosted the gathering. Among them was Russia’s Foreign Minister Sergey Lavrov, who flew out on Tuesday evening.

Those who remained heard Zelenskyy tell the summit: “There is a terrorist state among you, and we are defending ourselves against it. That is the reality.”

He also called for a “quick reaction” to the strike in Poland.

Poland has said there is no clear evidence on who launched the missile, and US President Joe Biden said it was “unlikely” it had been fired from Russia, which has denied involvement.
Following the deaths in Poland, Ukraine’s defense minister, Oleksiy Reznikov, called for a no-fly zone over Ukraine.

“We were asking to close the sky, because sky has no borders. Not for uncontrolled missiles. Not for the threat they carry for our EU & NATO neighbours. Gloves are off. Time to win,” he wrote on Twitter.

Here are the other main headlines from the war in Ukraine on Wednesday, November 16:

Pope asks God to ‘hurry up’ and end Ukraine war
Pope Francis condemned the latest wave of missile attacks on Ukraine, calling for a cease-fire to avert the risk of escalation of the conflict and asking God to “hurry up” to end it.

“I learned with pain and concern of a fresh and even fiercer missile attack on Ukraine, which caused deaths and damage to much civilian infrastructure,” Francis said.

“Let us pray so that the lord converts the hearts of those who still bet on war and make the desire for peace prevail in martyred Ukraine in order to avoid escalation and to open the path to a cease-fire and dialogue,” he said.

A few minutes later, in other comments on Ukraine, he added, “We can pray for Ukraine saying, if you will, ‘Hurry up, Lord.'”

Last month, the pope, for the first time, directly begged Russian President Vladimir Putin to stop the “spiral of violence and death” in Ukraine.

According to Rheinmetall, an agreement was reached between representatives of Germany, Slovakia and Rheinmetall in Brussels on Tuesday. The first Leopard is scheduled for delivery in December.

In the so-called ring exchanges, Germany does not deliver weapons directly to Ukraine, but rather to NATO partners who provide Soviet-made military equipment to Ukrainian forces.

“High-precision strikes were carried out on targets only on the territory of Ukraine and at a distance of no closer than 35 kilometers from the Ukrainian-Polish border,” Russian Defense Ministry spokesman Igor Konashenkov said on Wednesday.

According to Konashenkov, the cause of the explosion in Poland was the Ukrainian S-300 air defense missile.

NATO member Poland’s president said earlier that Poland had no concrete evidence showing who fired a missile that struck a Polish grain facility some 6 kilometers (4 miles) inside the border with Ukraine and killed two people.

“At a moment when world leaders here in Bali are seeking to make progress on world peace, Putin is striking civilian targets — children, women. I mean, it’s almost — my words, not yours — barbaric,” Biden said at a meeting with Sunak.

The British prime minister, meeting Biden for the first time since taking office, said: “I agree with your words — barbaric.”

Russia has been firing waves of missiles, often at civilians, across Ukraine in the wake of being pushed out of the city of Kherson, which Moscow had occupied and illegally declared to be part of Russia following a self-styled “referendum.”

“It’s way over the top,” Biden said. “Russia can and should stop the war.”

Biden told Sunak they were “on the same page in terms of supporting the Ukrainian people’s right to be free of all Russian forces in their country.”

Sweden to send military, humanitarian aid to Ukraine
Sweden said it would provide Ukraine with military and humanitarian aid worth €343 million ($356 million) to help it cope with the upcoming winter.

The military aid will include an air defense system and ammunition, but the government would not disclose which system or the value due to “operational secrecy”.

Prime Minister Ulf Kristersson said the aid package, Sweden’s ninth to Ukraine since the war began, was its largest so far.

The humanitarian package will be channeled through the World Food Programme, World Bank funds and Ukraine Green Recovery Programme, while the military aid also includes winter supplies such as tents and clothing.

Part of the humanitarian aid will also go to Ukraine’s impoverished neighbor Moldova, which has taken in a large number of Ukrainian refugees and has suffered direct consequences of the war, including a halt in electricity supplies from Ukraine.

CIA chief visits Kyiv after warning Moscow
CIA Director William Burns has met with Ukrainian President Volodymyr Zelenskyy and top intelligence officials to brief them on his warning to Moscow against using nuclear weapons, a US official said.

Burns traveled to Kyiv on Tuesday, one day after holding talks in Ankara with Russia’s spy chief Sergei Naryshkin on the war and Moscow’s threat to use tactical nuclear weapons to defend its interests.

That was the highest level face-to-face meeting of US and Russian officials since the beginning of the war, and Burns delivered a firm warning to Naryshkin “on the consequences of the use of nuclear weapons by Russia, and the risks of escalation to strategic stability,” according to a White House statement.

Then Burns traveled to Ukraine to inform Zelensky and his Ukraine counterparts on the talks with Naryshkin, and to reiterate US support for Kyiv’s war effort.

Burns was in Kyiv on a day when Russian forces launched a barrage of missiles striking targets across Ukraine, including the capital city. However, he was safely inside the US embassy at the time, and has now departed.

“As a result of the strikes, automation today disabled several nuclear units at two stations — these are calculated consequences, and the enemy knew exactly what he was doing,” Zelenskyy said in his nightly video address.

Zelenskyy did not say which power plants were affected but said that strikes hit the capital Kyiv as well as Lviv, Rivne and Volyn in the west, Kharkiv in the northeast, Kryvyi Rih and Poltava in the center, Odesa and Mikolaiv in the south and Zhytomyr in the north.