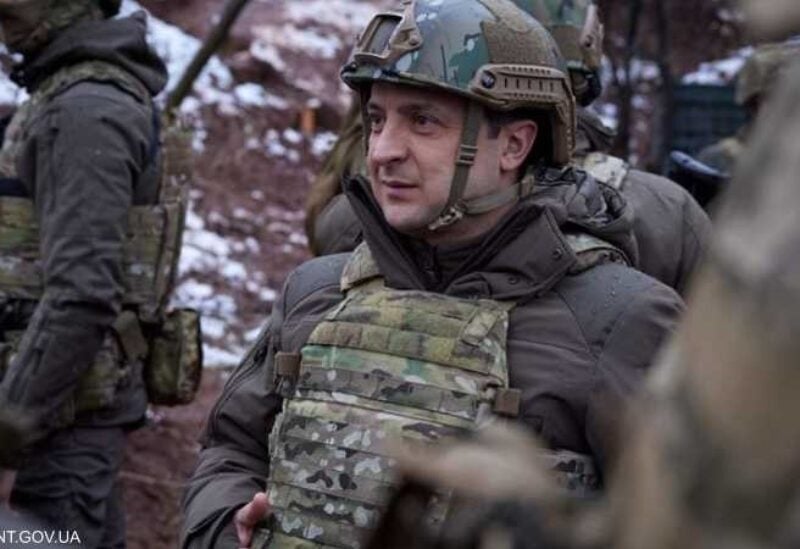 As Blinken and Lavrov were speaking for the first time since the beginning of the war, Kyiv and Moscow were trading blame for shelling a POW prison in a separatist region of eastern Ukraine.
Ukrainian President Volodymyr Zelenskyy on Friday denounced as a war crime what he said was the Russian shelling of a jail holding Ukrainian prisoners of war (POWs).

“I heard reports today about the attack of the occupiers on Olenivka, Donetsk region. It was a deliberate Russian war crime, a deliberate mass murder of Ukrainian prisoners of war. More than 50 dead,” Zelenskyy said in a late-night video address.

He called on Washington to declare Russia as a state sponsor of terrorism following the attack.

“I am appealing especially to the United States of America. A decision is needed and it is needed now,” Zelenskyy said, adding that the United Nations and the International Committee of the Red Cross (ICRC) needed to do more to protect Ukrainian POWs.

Russia’s Defense Ministry earlier claimed that Kyiv’s forces had carried out the attack, in which 40 reportedly died, to prevent its soldiers from surrendering due to low morale.

The Ukrainian military denied making any strikes in Olenivka, and it accused the Russians of shelling the prison to cover up the alleged torture and execution of Ukrainians there.

The reports have not been independently verified.

The Ukrainian soldiers were taken prisoner by invading Russian forces after fierce fighting for the port of Mariupol on the Azov Sea. The Ukrainians had been holed up at the Azovstal steel plant for months as they defended the city.

Meanwhile, the ICRC said it was seeking access to the facility and has offered to help evacuate the wounded.

Here are the other main headlines from the war in Ukraine on July 29.
Russian forces bombarded the outskirts of the Ukrainian capital, Kyiv, on Thursday in the first attack in weeks on the city as Moscow continues its monthslong invasion of its neighbor.

Missiles targeting military installations in the district of Vyshhorod injured 15 people, according to a Telegram statement by Kyiv regional Governor Oleksiy Kuleba.

Life in Kyiv had been returning almost to normal following a failed Russian attempt to take the capital in the early weeks of Moscow’s invasion, which was launched on February 24.

The attack came as Ukraine marked its Day of Ukrainian Statehood — a new public holiday implemented by President Zelenskyy after the war broke out — for the first time, and as Lithuanian President Gitanas Nauseda was paying a visit to Kyiv.

The Chernihiv region northeast of Kyiv was also hit by 10 Russian missiles on Thursday, the regional governor, Vyacheslav Chausov. told Ukrainian TV. This was, again, the first attack on the area in weeks.

The North district command of the Ukrainian armed forces said more than 20 missiles had been fired from Belarus at the Chernihiv region, which borders Russia.
On the other hand, US Secretary of State Antony Blinken and Russian Foreign Minister Sergey Lavrov spoke for the first time since Russia invaded Ukraine on February 24.

Blinken told reporters afterward, “We had a frank and direct conversation. I pressed the Kremlin to accept the substantial proposal that we put forward.”

Blinken was referring to a proposal the Biden administration made public Thursday to exchange Russian arms dealer Viktor Bout who is in prison in the US for the detained Americans, US Olympian and women’s basketball star Brittany Griner and former US Marine Paul Whelan.

The US Secretary of State also said he told Lavrov that the world will not recognize Russia’s effort to annex part of Ukraine’s territory.

A Russian Ministry of Foreign Affairs readout said Lavrov told Blinken the US was not living up to promises that exempt food from sanctions against Moscow.