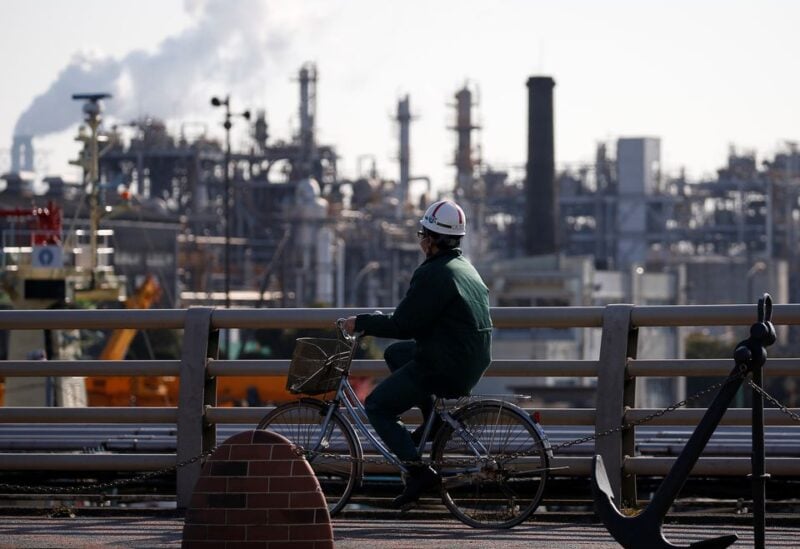 A worker cycles near a factory at the Keihin industrial zone in Kawasaki, Japan February 28, 2017. REUTERS/Issei Kato

In April, Japan’s factories reported a steep drop in output as a result of China’s COVID-19 lockdowns and wider supply disruptions, clouding the outlook for the trade-dependent economy.

Separate statistics showed that retail sales increased for the first time in nearly a year as the government loosened epidemic restrictions, despite wider price hikes that threaten to dampen demand.

Factory output dropped 1.3% in April from the previous month, official data showed on Tuesday, on sharp falls in the production of items such as electronic parts and production machinery.

It was the first fall in three months and much weaker than a 0.2% decline expected by economists in a Reuters poll.

The data comes a day after Toyota Motor Corp missed its global production target for April with its output falling more than 9% year-on-year, as China’s lockdowns exacerbated a parts shortage.

The world’s largest automaker by sales had already on Friday cut its global production plan for June and signalled the possibility of lowering its full-year output plan of 9.7 million vehicles.

“Japan’s production is likely to keep stalling in the short term as disruptions in the global supply chain continue,” said Kazuma Kishikawa, economist at Daiwa Institute of Research.

A full recovery of goods transportation from China would likely take time even after Shanghai ends its strict COVID-19 lockdown from Wednesday, Kishikawa said, adding that it was likely to weigh on Japanese output.

“Logistics won’t be restored in a day,” he added.

While activity in Japan’s services sector is picking up as the pandemic subsides, the country’s manufacturing sector has been pressured by supply disruptions and higher material prices caused by Russia’s war in Ukraine.

High-tech chip and parts shortages could hurt consumption and exports of durable goods such as cars due to output disruptions, said Takeshi Minami, chief economist at Norinchukin Research Institute.

“But spending on services is expected to eclipse that so growth will likely come in positive in the second quarter,” said Minami.

He believes a technical recession, defined as two consecutive quarters of economic contraction, is unlikely.

Analysts expect gross domestic product (GDP) to grow an annualised 4.5% this quarter, with a majority seeing a recovery to pre-pandemic levels, according to a Reuters poll conducted in May. That would follow the decline seen in the first quarter.

“The soft activity data for April suggest that the Q2 rebound may disappoint, though it’s worth noting that they don’t tell us anything about the recovery in the service sector,” wrote Tom Learmouth, Japan economist at Capital Economics, in a note.

Manufacturers surveyed by the Ministry of Economy, Trade and Industry (METI) expected output to return to growth in May, gaining 4.8%, followed by a 8.9% advance in June.

Learmouth said while such forecasts would point to a strong rebound this quarter, firms’ production plans have been “overly optimistic”, even with supply shortages, suggesting some downside.

Separate data showed retail sales grew 2.9% in April from a year earlier, marking their sharpest gain since May 2021. That was bigger than the median market forecast for a 2.6% rise.

The government also said a consumer confidence index rose in May for the second straight month, while the jobless rate edged down to a more than two-year low of 2.5% in April from the previous month’s 2.6%.