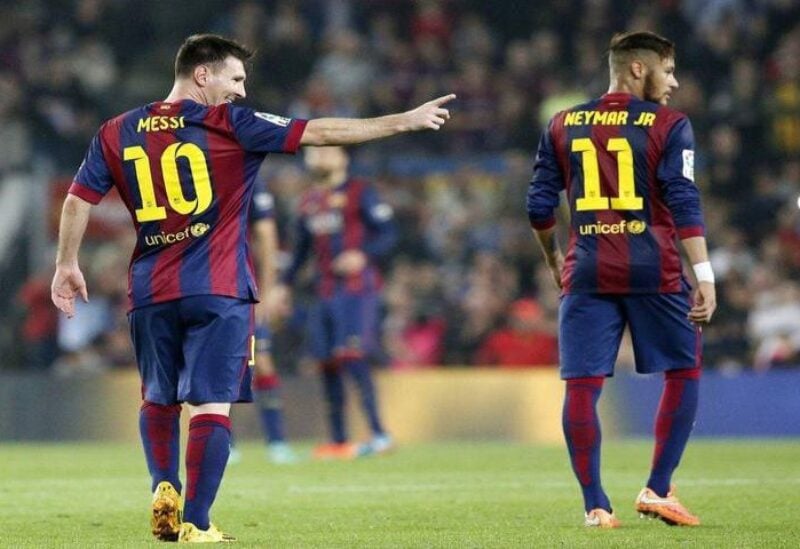 Barcelona's Lionel Messi celebrates one of his three night next to teammate Neymar in their 5-1 win over Sevilla in La Liga. Gustau Nacarino, Reuters

The agreement requires the approval of the league’s 20-member football clubs that include Barcelona and Real Madrid and could boost liquidity in them, the newspaper reported. An investment from CVC would be a boon to La Liga after the Covid-19 pandemic shut down stadiums and clubs incurred billions of dollars in lost revenue.

Spain’s La Liga is the second-most profitable football league in the world after the English Premier League, according to Fitch Ratings. Total domestic and international TV rights increased to $2.4 billion per year in the last tender for 2021-2023 from €1.38bn in the previous 2016-2019 cycle.

“The high level of contracted broadcast revenues is reflective of strong fan and corporate support, including during stress years. The league has a moderate-to-high percentage of shared revenues across competing teams,” according to the ratings agency.

The second-tier league Segunda gets 10 per cent of the revenue distribution, with the remaining 90 per cent to La Liga, according to Fitch estimates. Half of the 90 per cent is distributed equally between the league’s teams, with 25 per cent allocated according to results from the previous five seasons, and the last 25 per cent based on metrics that include the number of TV subscribers and viewers per match.

La Liga has no definitive wage cap and its player-salary structure does not promote equal opportunities between the clubs in talent acquisition, according to Fitch.

“The same two to three teams, which earn and therefore spend significantly more on players than the remaining 17 to 18 teams, tend to compete for the prized top four positions that qualify for the group stage of the lucrative Uefa Champions League,” according to Fitch.

Argentine forward Lionel Messi, who was the highest paid player last year earning $126 million, according to Forbes, was a free agent as of July 1 after he failed to reach an agreement over his previous Barcelona contract renewal, which expired on June 30. The 34-year-old player subsequently signed a five-year contract extension with Barcelona last month but took a 50 per cent annual salary cut.