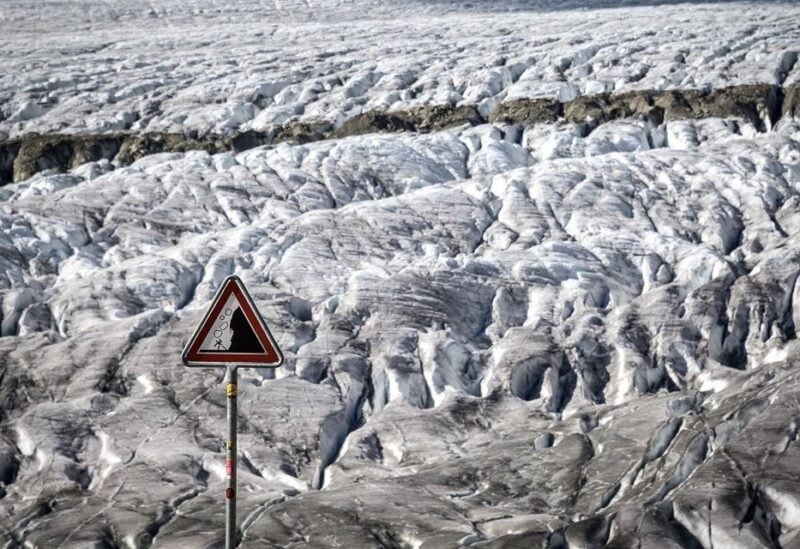 This picture taken on October 01, 2019 shows a warning sign for rockslide next to the Aletsch glacier above Bettmeralp, Swiss Alps. (Fabrice Coffrini/AFP)

Switzerland is in a good position to achieve its target of achieving net zero in greenhouse gas emissions by 2050, the government said on Wednesday, rejecting a campaign that wants to ban fossil fuels.

The government has come up with a counterproposal to the so-called Glacier Initiative referendum drive, which wants to limit the impact of climate change in the Alpine country.

The topic has become sensitive in Switzerland, where dry summers, heavy rains and snow-scarce winters are among the expected consequences of unchecked climate change.

The campaign “for a healthy climate (Glacier Initiative)” collected enough signatures in 2019 for a binding vote to be held under the Swiss system of direct democracy.

The vote, which is due by 2024, wants a ban on the sale of fossil fuels such as oil, gasoline, or diesel in Switzerland after 2050, with some small exceptions.

The government said it shared their concerns and wanted to reach the same goal of reaching net zero in greenhouse gas emissions by 2050.

“As a particularly affected Alpine country Switzerland has a vested interest in limiting climate change,” the government said.

“However, the initiative goes too far for the Federal Council (government) in certain areas,” it added. “Switzerland is strong in innovation and finance and therefore in a good position to achieve the net zero target by 2050.”

The government said it opposed a ban on fossil fuels from 2050 and would also like the new measures to take into account the special situation of mountain regions.

The government also said the army, police and rescue services should still be allowed to use fossil fuels after 2050. It also doubted whether greenhouse gas emissions could be offset, saying there was limited capacity for permanent CO2 storage in Switzerland.