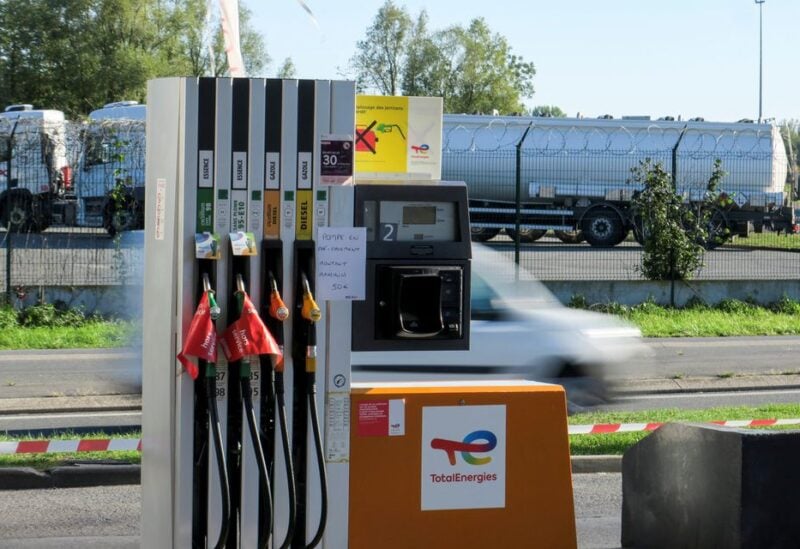 Signs which read "out of order" are seen on gasoline pumps at a TotalEnergies gas station just in front of a petrol storage facility in Haulchin near Valenciennes, France, October 9, 2022. REUTERS

TotalEnergies proposed to move salary discussions forward in response to union demands on Sunday, as it attempted to end a walkout that has interrupted supply to about a third of French fuel outlets and forced the government to draw strategic reserves.

“Provided the blockades dissolve and all labor representatives agree,” the firm stated in a statement, “the company offers to move the start of required annual wage discussions to October.”

The talks were initially scheduled to start in mid-November.

Union representatives earlier told Reuters the strikes staged by the CGT, historically one of France’s more militant unions, would continue. They have disrupted operations at two ExxonMobil sites as well as at two TotalEnergies sites.

Over roughly two weeks of industrial action, France’s domestic fuel output has fallen by more than 60%, straining nerves across the country, as waiting lines grow and supplies have run dry.

Almost a third of France’s petrol stations had problems getting deliveries of at least one fuel product on Sunday, up from 21% the day before, the office of the energy minister said.

France has released strategic reserves and raised imports, Energy Minister Agnes Pannier-Runacher said in a statement, adding these should mean the supply situation improves on Monday.

Speaking to BFM TV, she welcomed TotalEnergie’s offer and said she expected a move from ExxonMobil’s Esso France unit “so that the French people are not taken hostage by this social dispute and can go to work with confidence”.

ExxonMobil in France did not immediately reply to a request for comment.