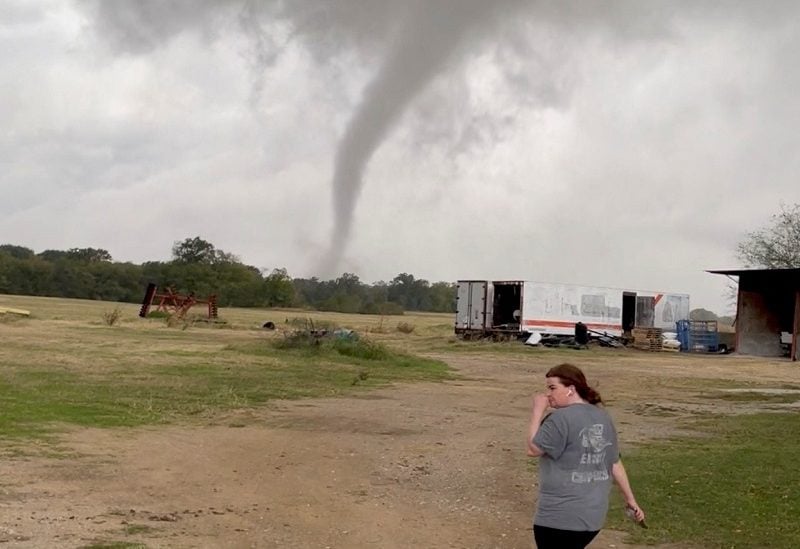 A woman walks in a farm as the funnel cloud of a tornado is seen in the background, in Greenview, Texas, U.S, November 4, 2022, in this screen grab taken from social media video. TWITTER @RCF_2008/via REUTERS THIS IMAGE HAS BEEN SUPPLIED BY A THIRD PARTY. MANDATORY CREDIT. NO RESALES. NO ARCHIVES.

As tornadoes ravaged areas of Oklahoma and neighboring Texas, Authorities said that at least one person has died, and some people are trapped, while dozens of homes are in ruins.
The twisters Friday destroyed large portions of the town of Idabel in McCurtain County, Oklahoma, flattening a church, restaurant and medical center. Officials confirm at least one death in that county.
Meanwhile, 50 homes were reported damaged or destroyed in Lamar County, Texas, where at least two dozen people are reported injured, two critically.
Oklahoma Gov. Kevin Stitt said search and rescue teams as well as generators were being sent to the Idabel area in McCurtain County, which state emergency officials said was the hardest-hit by the storms.
“Praying for Oklahomans impacted by today’s tornadoes,” Stitt said in a Twitter post.
Photographs showed Idabel’s Trinity Church and Kiamichi Family Medical Center had been torn apart by the tornado.
Keli Cain of the Oklahoma Emergency Management Office said at least three other counties were also hit by storms, with flash flooding in some areas.
The National Weather Service had issued multiple tornado warnings on Friday stretching from the Dallas-Fort Worth area into Oklahoma. The storm system was then headed toward Arkansas and Louisiana.
In Texas, one community hit hard was Powderly, about 45 miles (72 kilometers) west of Idabel and about 120 miles (193 kilometers) northeast of Dallas.
Lamar County Judge Brandon Bell — the highest elected official in the county that includes Powderly — declared a disaster in the area, a step in getting federal assistance and funding. Bell’s declaration said at least two dozen people were injured across the county in what he said was a confirmed tornado.
The Lamar County Sheriff’s Office and Emergency Management said in a news release that 10 injured people had been treated at an area hospital, and two of those people had critical injuries. It said at the time the news release was issued there had been no deaths reported.
The Sheriff’s Office said the tornado touched down shortly after 4 p.m. and traveled north-northeast through the communities of Hopewell, Caviness, Beaver Creek and Powderly. It said about 50 homes had been damaged or destroyed.
Randi Johnson, chief of the Powderly Volunteer Fire Department, told The Paris News newspaper that she wasn’t aware anyone had been killed but knew of injuries.
“It’s going to take a long time to get this cleaned up, but the community came together,” Johnson said. “It’s really heartbreaking to see.”
Churches opened their doors to serve as shelters for those whose homes were impacted.