100 days of the Russia-Ukraine war: A battle of beliefs 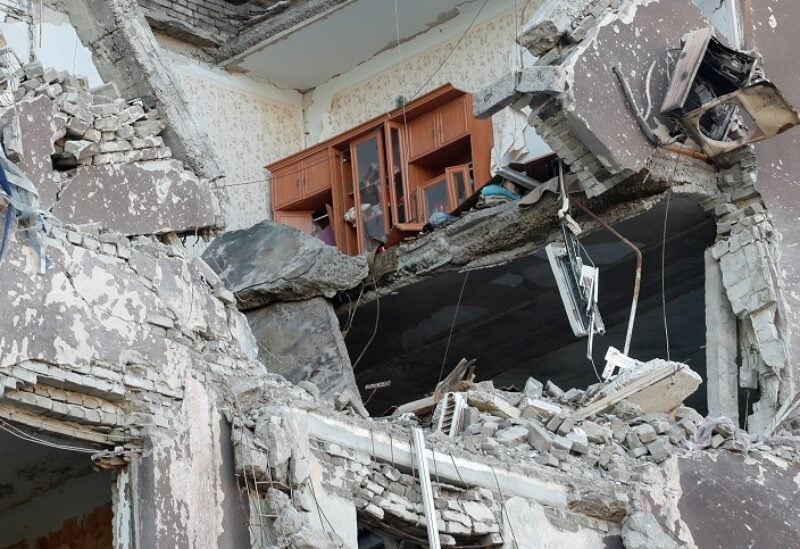 A view shows a block of flats destroyed during Ukraine-Russia conflict in the southern port city of Mariupol, Ukraine May 3, 2022. REUTERS/Alexander Ermochenko

As the 100th day of the Russia-Ukraine war approaches, many things have become crystal clear.

Russian President Vladimir Putin’s concept of “the Russian World”, or the Kremlin’s right to “protect” ethnic Russians and Russian-speakers wherever they are has failed abysmally in Ukraine.

Putin’s claims that Russians and Ukrainians are “one people” are now rejected by nearly all Ukrainians – almost a decade after 85 percent of them said they “felt good” about Russia, and 16 percent wanted both nations to merge, according to a 2013 poll by the Kyiv International Sociology Institute.

Ukrainians are adamant that Putin’s plan to “de-Nazify” Kyiv and replace President Volodymyr Zelenskyy with a pro-Kremlin puppet will never come true.

Some on both sides came to a simple yet overwhelming conclusion that the war is mostly about their beliefs that could easily be seen as “religious”.

Russia invaded Ukraine because of the latter’s “conversion” to the concept of free elections and freedom to break away from Moscow’s political orbit and seek membership in the European Union and NATO.

And the Kremlin wants Russians to believe – unquestionably and blindly – in the “Nazi” policies of Zelenskyy and his government, even though he hails from a Russian-speaking Jewish family and some of his advisers and officials are of Armenian, Georgian, Afghan and Korean origin.

The Azov battalion has become, according to Kremlin propaganda, a group of “Nazi” bogeymen.

Some Azov fighters do believe in white supremacy, ultra-nationalism and intolerance towards LGBTQ rights and feminists.

But even though they – along with other Ukrainian far-right groups – staged huge rallies and attacked critics and police officers with impunity, their real influence on Ukrainian politics has been limited.

However, that fact never stopped Kremlin-friendly “experts” from making Russians believe that each Azov fighter is a “Satanist” who kills people for “religious” purposes.

“They profess a fusion of paganism and German occultism, in essence, Satanist rituals, including human sacrifice, the cult of blood, marches with torches,” Aleksey Kochetkov told the Komsomolskaya Pravda daily on April 27.

“[The US is] breeding hatred towards Russia,” a friend from Moscow told me.

She is an ethnic Ukrainian, but still believes in the “genocide” of Russian-speaking Ukrainians in the southeastern region of Donbas – even though she is able to use a VPN to skirt Russian bans on Facebook and foreign and independent news outlets and can surf news sources in English.

Perhaps it is easier to be with the majority, not to feel alienated and ostracised.

Another Moscow-based friend told me the war’s “religious” aspect is beyond Orwellian, describing the people around her as “zombies” straight out of a Stephen King horror story.

“I am surrounded by zombies. No one forces them, they support the war voluntarily and with joy,” she told me in early April.

But for each action, there is a counter-reaction.

Many Ukrainians demonise every Russian – servicemen or civilian – and seek to cancel Russian culture around them.

Many Ukrainians also choose to idolise their servicemen, and adamantly reject any facts about the war crimes they may have committed recently or in the past.

A perfectly lucid 90 year-old woman I interviewed in early March told me about massacres and rapes she witnessed in Volyn, now western Ukraine, by anti-Soviet paramilitaries of the Ukrainian Insurgent Army during the Second World War.

When I told a much younger Ukrainian about the old lady’s story, she said the lady must be “senile” or “brainwashed” by Soviet propaganda.

She religiously believed that each Ukrainian patriot is a knight in shining armour – and that the massacres Russian servicemen committed in Ukraine during this war were uniquely inhuman and unprecedented in history.