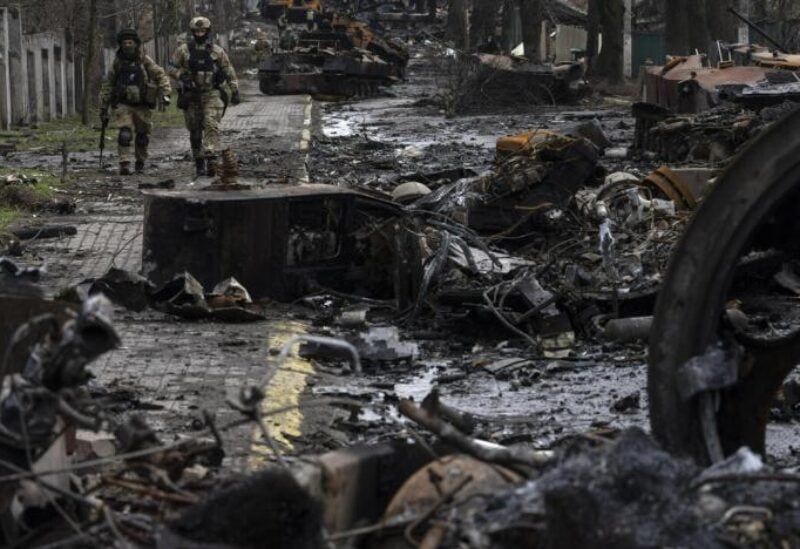 At least 17 people were killed and dozens wounded Friday in missile strikes on Ukraine’s Odessa region, a day after Russian troops abandoned positions on a strategic island in a major setback to the Kremlin’s invasion.

The news came after NATO leaders wrapped up a summit in Madrid, with US President Joe Biden announcing $800 million in new weapons for Ukraine, AFP reported.

But Russian Foreign Minister Sergei Lavrov compared surging diplomatic tensions to the Cold War, telling reporters: “As far as an Iron Curtain is concerned, essentially it is already descending… The process has begun.”

There was a glimmer of hope however, when Indonesian President Joko Widodo, who visited Moscow on Thursday after a trip to Kyiv, said he had given Russian President Vladimir Putin a message from their Ukrainian counterpart, Volodymyr Zelensky.

Neither side has revealed what was in the note.

Hours after the summit ended, missiles were fired at an apartment building and recreation center in the southern region of Odessa, a strategic flashpoint that is home to Ukraine’s historic port city of the same name.

Three people, including a child, were killed and one wounded in the attack on the recreation center, they said.

The strikes, in the Bilgorod-Dnistrovsky district, were launched by aircraft that flew in from the Black Sea, said Odessa military administration spokesman Sergiy Bratchuk.

“The worst case scenario played out and two strategic aircraft came to the Odessa region,” he said in a TV interview, adding they had fired “very heavy and very powerful” missiles.

Bratchuk urged people not to post online information about the rescue operation.

The early Friday strikes came a day after Russian troops abandoned their positions on Snake Island, off the coast of Odessa.

The island had become a symbol of Ukrainian resistance in the first days of the war, when the rocky outcrop’s defenders told a Russian warship to “go f*ck yourself” after it called on them to surrender — an incident that spurred a defiant meme.

It was also a strategic target, sitting aside shipping lanes near the port of Odessa. Russia had attempted to install missile and air defense batteries while under fire from drones.

The decision to abandon Snake Island “changes the situation in the Black Sea considerably,” Zelensky said in his daily address Thursday.

British Prime Minister Boris Johnson cited Snake Island as he warned the Russian president that any eventual peace deal would be on Ukraine’s terms.

The Russian defense ministry statement described the retreat as “a gesture of goodwill” meant to demonstrate that Moscow will not interfere with UN efforts to organize protected grain exports from Ukraine.

But Ukraine officials claimed it as a win.

In peacetime, Ukraine is a major agricultural exporter, but Russia’s invasion has damaged farmland and seen Ukraine’s ports seized, razed or blockaded — threatening grain importers in Africa with famine.

Western powers have accused Putin of using the trapped harvest as a weapon to increase pressure on the international community, and Russia has been accused of stealing grain.

On Thursday, a ship carrying 7,000 tons of grain sailed from Ukraine’s occupied port of Berdyansk, said the regional leader appointed by the Russian occupation forces.

Evgeny Balitsky, the head of the pro-Moscow administration, said Russia’s Black Sea ships “are ensuring the security” of the journey, adding that the port had been de-mined.

Separately, the Russian defense ministry said its forces are holding more than 6,000 Ukrainian prisoners of war who have been captured since the February 24 invasion.

The conflict in Ukraine dominated the NATO summit in Madrid this week, as the alliance officially invited Sweden and Finland to join, and Biden announced new deployments of US troops, ships and planes to Europe.

Russian missiles continued to rain down elsewhere in Ukraine and a United Nations official said Thursday that 16 million people in Ukraine were in need of humanitarian aid.

In the southern city of Mykolaiv, rescuers found the bodies of seven civilians in the rubble of a destroyed building, emergency services said.

The city of Lysychansk in the eastern Donbas region — the current focus of Russia’s offensive — is also facing sustained bombardment.

The situation in Lysychansk — the last major city the Russians need to take over in the Lugansk region — was “extremely difficult” with relentless shelling making it impossible to evacuate civilians, regional governor Sergiy Gaiday said.

“There is a lot of shelling… The Russian army is approaching from different directions,” he said in a video posted on Telegram.