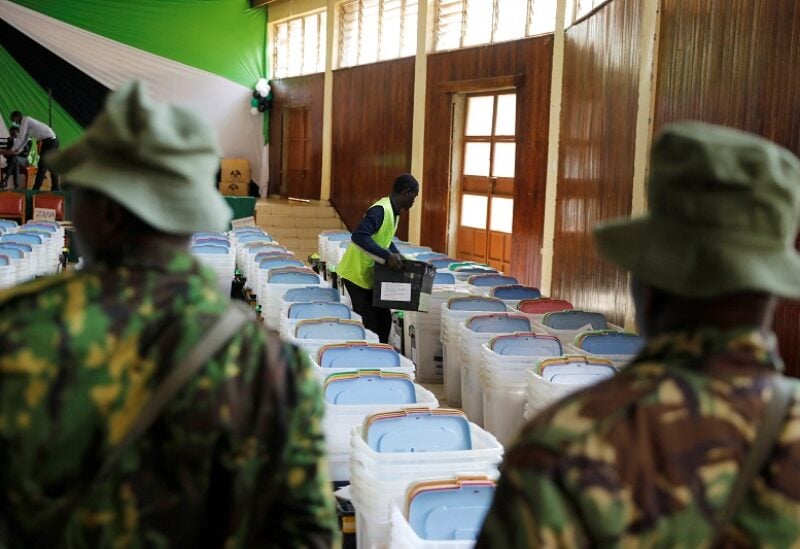 Police officers watch as an employee of the Independent Electoral and Boundaries Commission (IEBC) arranges ballot boxes and election materials at a tallying centre in Eldoret, Kenya, August 8, 2022. REUTERS/Baz Ratner

Kenya’s high-stakes general elections that will be held on Tuesday, will be attended by around 18,000 observers, authorities said.

Around 10,000 local and international observers have already been given the necessary clearance, Wafula Chebukati, head of Kenya’s Independent Electoral and Boundaries Commission (IEBC), told a news conference last week.

He said applications of 8,000 more observers are currently being processed and will be approved before the elections.

The Kenyan government has declared a nationwide public holiday on Aug. 9.

More than 46,200 polling stations have been set up across the East African country, while the distribution of election materials is 90% complete, according to the IEBC.

Over 22 million registered voters in the country of some 54 million are expected to have their say as Kenya elects a new president, parliament, members of 47 county assemblies and county governors.

Having served the maximum possible two terms, incumbent Uhuru Kenyatta is out of the presidential race.

A close contest is expected between the two main contenders – William Ruto, Kenya’s deputy president since 2013 and leader of the United Democratic Alliance, and former Prime Minister Raila Odinga, who heads the Orange Democratic Movement.

Kenyatta has opted to support Odinga, his former rival for the top post who is making his fifth presidential run, rather than his own deputy.

International watchdog Human Rights Watch (HRW) has warned that the failure of Kenyan authorities to address “past abuses by police heightens the risk of police abuse” around the general elections.

“Kenya has a history of election-related violence including excessive and unlawful use of force by police, with few, if any, police officers held to account,” read an HRW statement released on Tuesday.

Kenya grappled with months of post-election violence in 2017 that claimed dozens of lives.

HRW said it worked with Kenyan and other international human rights organizations to document the killings of 104 people by police and armed gangs.

Most of the victims were supporters of the then-main opposition party, the National Super Alliance, the watchdog said.

In 2007, post-election violence killed over 1,100 people and displaced thousands more throughout Kenya.