A drug ambush leads to a “shocking” end for British police 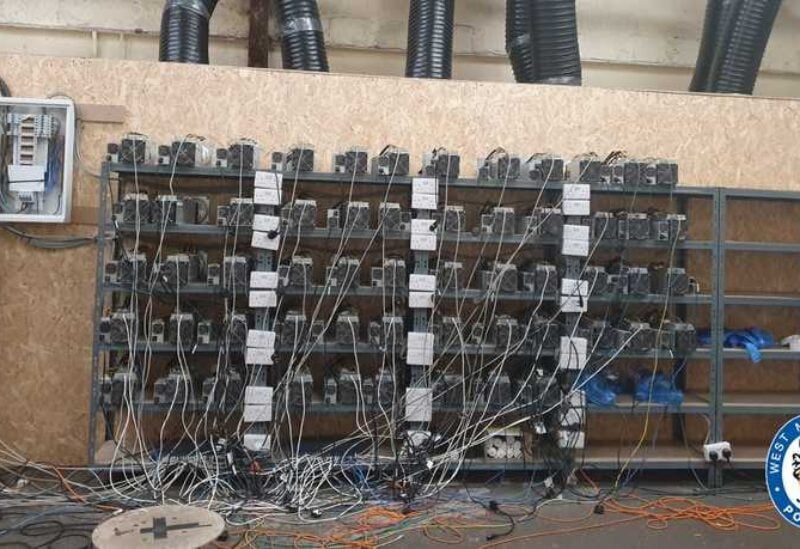 British police were shocked when they were supposed to raid a suspected illegal cannabis plantation this week, but what they later discovered was surprising.

At the end of the operation, they found about 100 computers used to make the cryptocurrency Bitcoin, according to the American Wall Street Journal .

West Midlands police officers raided a warehouse west of Birmingham, based on a warrant related to drug control, after receiving information from the intelligence agency indicating that it was being used to grow cannabis illegally.
What was striking was the large amount of wires and ventilators that appeared outside the warehouse, and the drone measured high levels of heat rising from it, all of which were signs indicating a cannabis factory, but after the officers stormed the warehouse, it turned out to be a cryptocurrency factory.

Police found that the computers were using stolen electricity from an energy source outside the warehouse, and police said the factory consumes thousands of dollars of electricity.

The cryptocurrency industry, especially Bitcoin, has become a profitable business, as the value of this digital currency rose to the limits of $ 60,000 last April. But the process of making these coins, which uses computers to solve complex mathematical puzzles, requires a great deal of energy and is very costly.

The process of obtaining Bitcoin consumes a lot of energy, and with the increasing number of people competing to harvest this cryptocurrency, the difficulty of mathematical puzzles increases, which requires more energy to obtain it, and Tesla founder Elon Musk criticized the large consumption of energy when making Bitcoin.

This week, Iran banned the digital currency industry for four months after frequent power cuts in some regions.

President Hassan Rouhani told a cabinet meeting that the digital currency industry was draining 2 gigawatts of electricity. One gigawatt is enough to power 110 million LED lights, according to the US Department of Energy.

The world’s cryptocurrency industry consumes about 114 terawatt hours per year, which is more than the annual electricity needs of the Netherlands or the Philippines, according to the Cambridge Business School Alternative Finance Center.