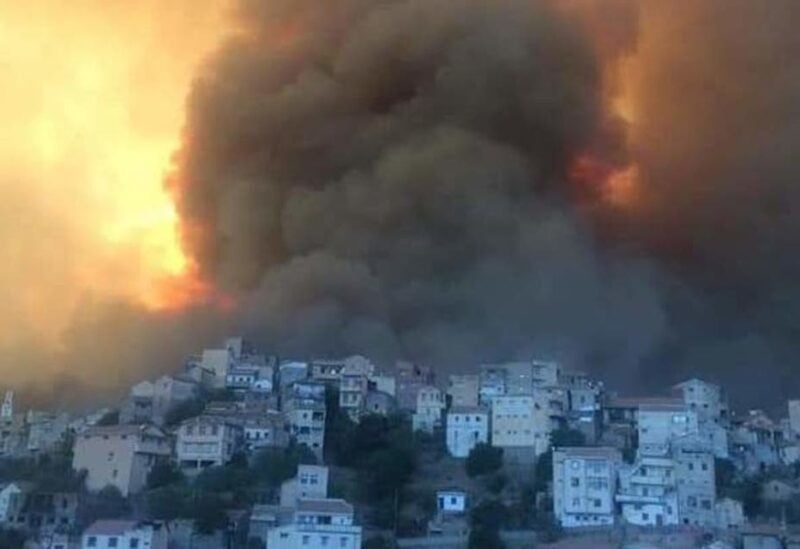 The minister of the Interior, Local Authorities and National Planning, Kamel Beldjoud, said the wildfires that broke out in various parts of Tizi-Ouzou on Monday, killing four people, are of criminal origin. (Twitter)

Social media activists circulated video clips documenting the moment of the arrest of some of the people who set fire to the mountains of Tizi-Ouzou in Algeria, Al Hadath reported on Wednesday.

The Public Prosecutor of the Algerian city of Tizi Ouzou, Abdelkader Amrouche, said that work is underway on a draft law to amend the Forestry Law.

He explained in his interview with journalists that this draft law includes severe penalties for arsonists in the forests, even if they are minor, stressing that these penalties may reach 30 years in prison.

The minister of the Interior, Local Authorities and National Planning, Kamel Beldjoud, said the wildfires that broke out in various parts of Tizi-Ouzou on Monday, killing four people, are of criminal origin, reassuring the victims that they will be compensated, reported Algeria Press Service.

The minister of the Interior, who was accompanied by the ministers of Agriculture and National Solidarity, told reporters that “criminals full of hatred against our country and wanting to harm Algeria are behind the fires that broke out in Tizi-Ouzou.”

“Only criminal hands can be behind 50 fires breaking out at the same time in various parts of the province,” he added.

Beldjoud pointed out the similarity of these “criminal” fires with others recorded in other parts of the country.

He said investigations will be opened into the wildfires to identify and punish the guilty.

The minister reassured the disaster victims that they will be compensated for their losses.

“Next Saturday, a delegation of 130 to 140 experts will visit the fire affected areas in Tizi-Ouzou to assess the damage and losses.”

Beldjoud gave instructions for the mobilization of all available facilities (hotels, youth hostels, etc.) to accommodate families who lost their homes to the fires.

“The current priority is to protect the local populations and preserve lives,” he said, lamenting the loss of six people, including a 23-year-old girl.