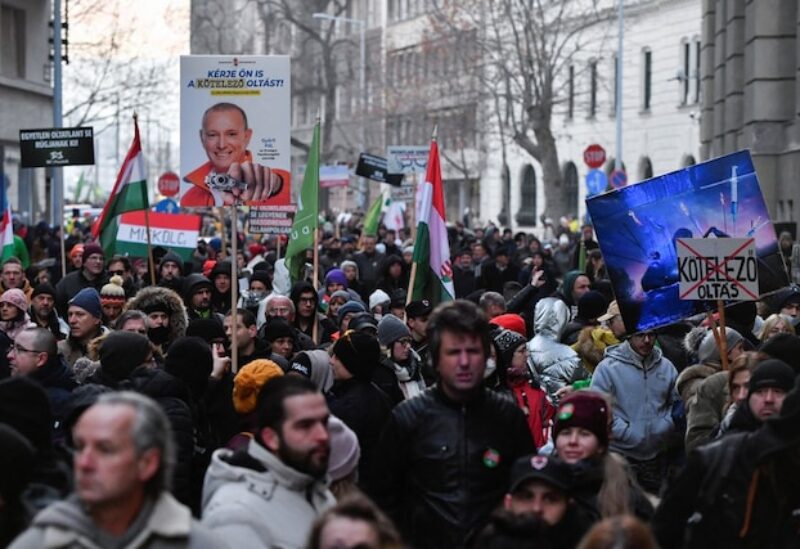 Over a thousand people marched in Budapest protesting against COVID-19 inoculation at a rally organised by the far-right Our Homeland Movement, which has been campaigning on a fierce anti-vaccine and anti-immigration message ahead of April 3 elections.

“Vaccines should not be mandatory! We don’t tolerate blackmail,” said the slogan of the rally where people held up banners saying: “I am unvaccinated, not a criminal” and “Enough of COVID dictatorship.”

Hungary’s nationalist government has made COVID-19 vaccines mandatory only for teachers and healthcare workers.

With 10 million people and 40,237 people deaths from COVID-19 so far, Hungary has a vaccination rate of just over 60%, which lags western European levels.

Just over six million Hungarians have received at least two shots, and 3.3 million have also received a third booster.

New infections have spiked this week due to the Omicron variant but there are hardly any restrictions in place. The government now offers a fourth jab after a consultation with a doctor and a six-month gap.

Our Homeland, an offshoot of the former far-right party Jobbik, has allied itself with ultra-radical fringe groups in past years.

According to a December poll by Zavecz Research, Our Homeland had 3% support, which would be below the 5% threshold for making it into parliament at the April elections.

The ruling Fidesz had 38% support, while the six-party opposition alliance scored 39% in the poll, indicating that Prime Minister Viktor Orban faces a tough race for re-election after 12 years in power.