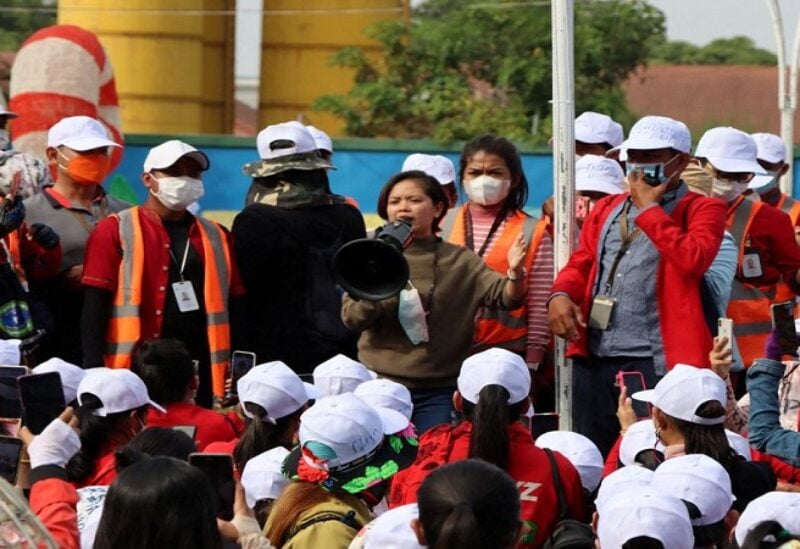 Sacked twice from her casino job and arrested this week on charges of endangering public security, union leader Chhim Sithar is the latest in a long line of activists to take on the challenge of campaigning for labour rights in Cambodia.

Chhim Sithar, 34, has been at the forefront of a strike at the country’s biggest casino, facing off against scores of riot police at protests in Phnom Penh.

Since December, employees of NagaWorld casino run by Hong Kong-listed Nagacorp Ltd’s (3918.HK) have been protesting against the layoff of 365 workers in the wake of disruption caused by the coronavirus pandemic.

Police say the strike is illegal and the protests threaten public security. NagaWorld has described the layoffs as unavoidable.

Twenty-seven people have been arrested – including Chhim Sithar, who was whisked away by plainclothes police shortly after she stepped out of her car on Tuesday to join the strikers.

Chhim Sithar is head of the Labor Rights Supported Union of Khmer Employees of NagaWorld (LRSU). With many of its activists in detention, no one from the union could be reached on Thursday for comment.

The U.S. embassy in Cambodia said on Tuesday it was concerned by the police action against the protesting workers.

Described as a gentle talker when not on the picket line, the slightly built Chhim Sithar has been a familiar face at the protests, speaking through a megaphone to rally her colleagues.

“Her charismatic leadership and courage should be praised not pressured. She should not be accused and arrested for her legitimate work,” said Chak Sopheap of Cambodian Center for Human Rights,

Heng Sour, spokesman at the Minstry of Labour, did not comment directly on the arrest but cited a court ruling declaring the strike illegal after dispute-resolution efforts reached an impasse.

Union leaders and striking workers in Cambodia have faced trouble in the past.

In recent years, strikes, mostly in the manufacturing sector, have often been accompanied by violence as police try to disperse crowds.

Global clothing and shoe brands including Adidas, PUMA and Levi Strauss in a 2020 letter urged veteran Prime Minister Hun Sen – who has been repeatedly accused of suppressing political opposition and whose ruling party holds all seats in parliament – to improve labour and human rights.

Hun Sen brushes off criticism of the human rights situation, especially when it comes from Western countries. Cambodia’s biggest donor is China, which has voiced support for measures to ensure stability.

In 2004, influential union leader Chea Vichea was shot dead at a newspaper kiosk in Phnom Penh. Another union leader, Ros Sovannareth, was shot and killed the same year. Their deaths have never been solved.

Born in the southeastern province of Prey Veng, Chhim Sithar has worked at NagaWorld since 2007 as a supervisor and became an active union member in 2009.

At the casino, she pushed for new mothers to get full salary for maternity leave instead of half pay. She also won for workers additional insurance and a 24-hour facility for refreshments.

“She is a role model of heroism. She wanted to sit down and find a solution, not run away,” said Yang Sophorn, president of Cambodian Alliance of Trade Unions.