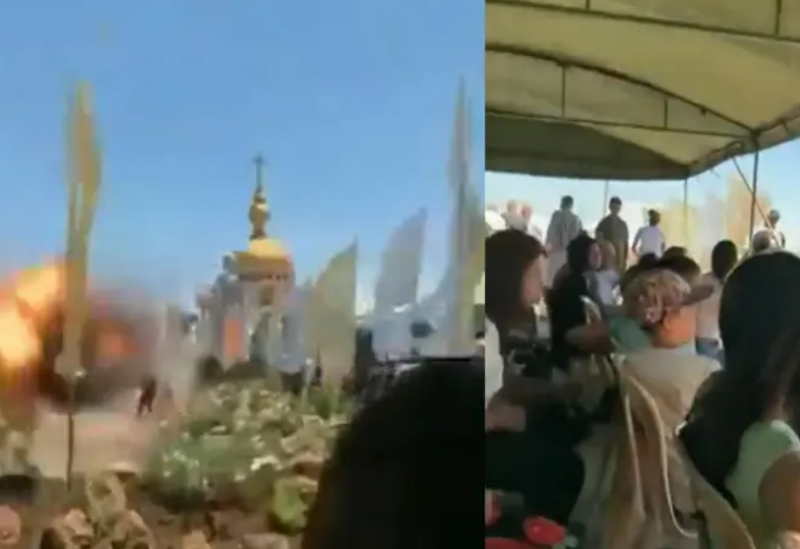 Two people were killed and 12 injured by bombardment of a church as it was being inaugurated in Syria's central province of Hama. (Screengrab)

In the central Syrian province of Hama, a church was being inaugurated when it was bombarded, resulting in two fatalities and 12 injuries, according to the official SANA news agency.

In the village of al-Suqaylabiyah, close to Hama, “a rocket fired by terrorist organizations struck a religious gathering, killing two people and injuring 12,” it was reported.

SANA said the attack came during a ceremony to inaugurate the Ayia Sofia church.

Britain-based war monitor the Syrian Observatory for Human Rights, which has a vast network of sources on the ground, confirmed the attack.

Giving a toll of one civilian killed and several wounded, the Observatory said shelling or a drone attack by nearby rebel groups could be to blame.

The Observatory said Friday’s fatalities in the Jisr al-Shughur countryside of northern Syria were caused by Russian air strikes.

Around half of Idlib province as well as parts of Aleppo, Hama and Latakia provinces are controlled by Hayat Tahrir al-Sham, the former franchise in Syria of al-Qaeda.

Other rebel groups in the last pocket of armed opposition to the Damascus regime also remain active, with varying degrees of Turkish backing.

In March 2020, Russia and Turkey brokered a truce in Idlib and neighboring areas that still holds, despite sporadic attacks from both sides, including Russian air strikes.

Syria’s war began in 2011 and has killed nearly half a million people and forced around half of the country’s pre-war population from their homes.