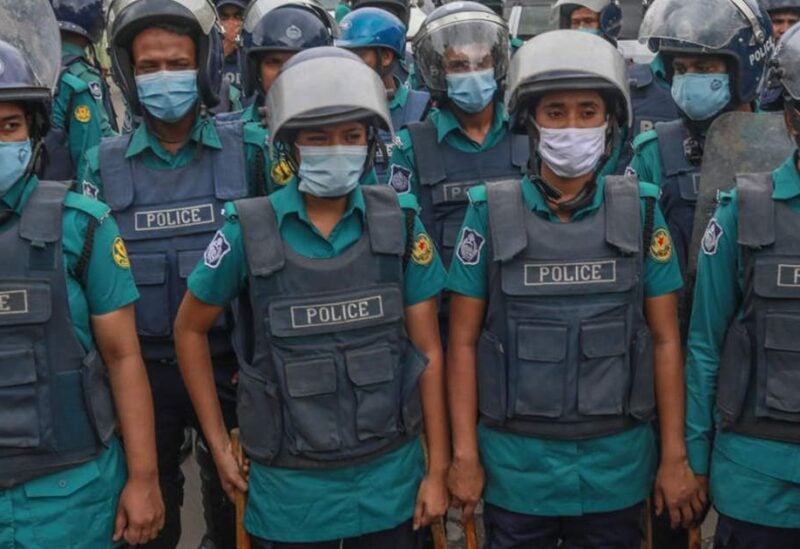 Thousands of party activists in Bangladesh have been hit with “fake” charges of violence in a widespread crackdown by authorities, the opposition has said, as a prominent human rights group expressed concerns.

Opponents of Prime Minister Sheikh Hasina – whose government faces a general election next year and is accused of rights abuses – have held protests across the country in recent months over power cuts.

“We are not able to sleep at night. There are constant sounds of firing guns. Sometimes there are explosions,” Yunus told Al Jazeera over the telephone.

“We have left our house and moved to a relative’s place. We are scared for our lives,” he said.

The firing from Myanmar has escalated tensions between the neighbours, raising concerns of a new Rohingya exodus into Bangladesh as well as diminishing prospects of their repatriation into Myanmar.

The Bandarban administration said it has started the process of relocating some 300 families living in Ghumdhum to a safer place further inland. The no-man’s land in the frontier area is also home to about 4,500 Rohingya refugees.

Last Friday, a Rohingya teenager was killed and four other Bangladeshi nationals injured when mortar shells fired from Myanmar exploded on a strip of land along the Bangladesh-Myanmar border.

Bangladesh has the world’s largest refugee camp with nearly a million mainly Muslim Rohingya, most of whom fled a brutal crackdown by the Myanmar military in 2017, which the United Nations said was carried out with “genocidal intent”.

Myanmar has been charged with genocide at the International Court of Justice in The Hague. Myanmar’s military denies the charges.

Bangladesh is lobbying with international agencies to repatriate the Rohingya back to their homeland, but the refugees have refused, citing safety concerns, and continue to stay in squalid and cramped camps.

Now, weeks of relentless gunfire and shelling by the Myanmar military along its border with Bangladesh have added to the tensions between the neighbours.

Local media reports earlier this month said more than a dozen Rohingya have entered Bangladesh amid the cross-border firing, seeking refuge in camps near Teknaf. Hundreds more Rohingya have gathered near the border in a bid to cross the Naf River into Bangladesh, the reports added.

Bangladesh foreign minister A K Abdul Momen this week said the government has sealed its border with Myanmar to prevent a further influx of Rohingya refugees into Bangladesh.

While Bangladesh’s border protection force, the Border Guards Bangladesh (BGB), has stepped up vigilance along the 271-kilometre (168-mile) Bangladesh-Myanmar border, Dhaka said it does not want to engage militarily and is seeking to resolve the tension through diplomatic channels.

Aung Kyaw Moe, Myanmar’s envoy in Dhaka, has been summoned four times in as many weeks by the Bangladesh foreign ministry, which has raised serious concerns over mortar shells falling on its territory, indiscriminate aerial firing and airspace violations.

Moe said the firings into Bangladeshi territory were conducted by the Arakan Army, an armed group fighting the Myanmar military for the rights of the ethnic minorities in Myanmar’s Rakhine and Chin states.

Since early August, fighting between the Myanmar military and the Arakan Army has increased along the border.

A top official at the Bangladesh foreign ministry told Moe the shells falling into Bangladesh were unacceptable. He said the dispute between Arakan Army and Myanmar military was their “internal affair” and how they chose to solve it was “completely up to them”.

Delwar Hossain, professor of international relations at Dhaka University, believes Myanmar military firing across the border and airspace violations by Myanmar could be ways to provoke Bangladesh to engage militarily.

“It will sort of divert the international attention from their internal conflicts with different ethnic minority groups that have been going on for long,” he told Al Jazeera.

He said Bangladesh was on the right track so far by not falling into Myanmar’s trap.

Hossain said Myanmar could be trying to force another Rohingya influx into Bangladesh’s territory.

“Myanmar also aims to make things more difficult so that the Rohingyas’ repatriation can be put off even longer. They see advantages if they can cause strife or military action in Bangladesh,” he said.

On Wednesday, Bangladesh’s home minister Asaduzzaman Khan held a meeting with the country’s security and law enforcement agencies. He later said the Bangladesh army was ready to defend the country if instructed to do so.

Foreign minister Momen, however, again stressed on Wednesday that Bangladesh had no intention of going to war with its neighbour and hoped the situation could be resolved diplomatically.