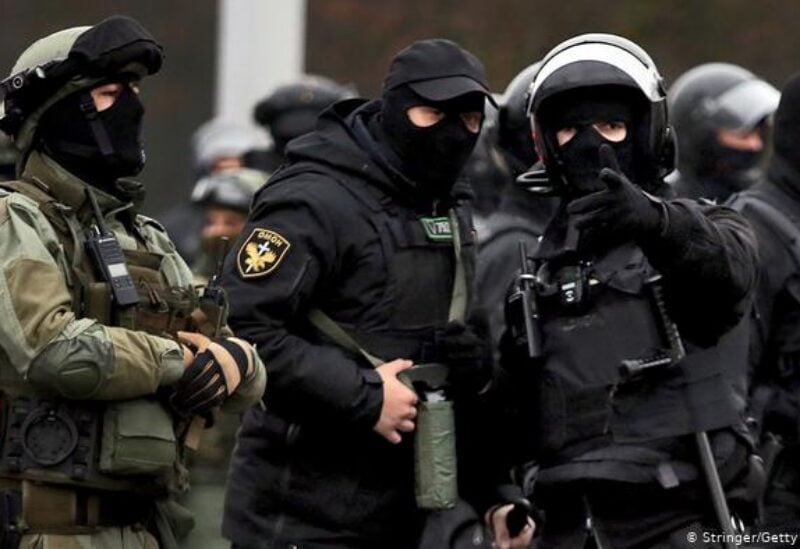 The trauma for Valery Samalazau continues each day. “I barely get any sleep, and have been prescribed antidepressants and sleeping pills,” he tells DW.

“My fingertips are numb since the torture; I have a hard time talking about how I was beaten, humiliated, and how they threatened to shove a baton into my anus,” says Samalazau, his voice shaking.

“You don’t want to remember it.”

Beaten and over a T-shirt

In 2020, Samalazau was working as an IT specialist in the UK. That summer, he traveled to his native Belarus to sort some paperwork and cast his ballot in the presidential election on August 9. During his stay, Samalazau lived on the outskirts of the Belarus capital Minsk.

Authorities declared long-time leader Alexander Lukashenko the winner soon after polling stations shut. The next day, country-wide demonstrations were staged to protest against the contested result — and Belarus authorities responded by arresting protesters en masse. Samalazau was detained while on the way to visit a friend in central Minsk on August 10.

“I was walking along the pavement when I was suddenly encircled and questioned,” he recalls. “I answered politely and showed my ID.” At the time, Samalazau was wearing a T-shirt bearing the skull logo of The Punisher, a Marvel comic book character. Because of the T-shirt, Belarus police accused him of sympathizing with the Azov Battalion, a neo-Nazi volunteer regiment fighting in eastern Ukraine. The group’s logo, however, does not actually feature a skull.

Police officers were also intrigued by Samalazau’s British bank cards, SIM cards and phone records showing calls to the UK. “They thought they had nabbed the protest organizer,” he says. Soon after, in a backyard near Minsk train station, police officers began beating Samalazau. After this, he was remanded in custody. Belarus authorities vowed to keep a close eye on the “foreign spy.”

Samalazau says the brutality was most severe at the police station and in the prisoner transport vehicle. “The van is a torture chamber on wheels. Many people screamed, cried, prayed, vomited in it. I lost consciousness twice from pain,” he says.

His hands were tied behind his back — and though grimacing in pain, he remained silent. Officers then twisted his arms further behind his back and began beating him, he says, and whispered into his ear: “Apparently, you don’t fear pain…but we will make you suffer.”

Samalazau says his arms went numb all the way down to his elbows. The pain, he recalls, was unbearable. He gathered all his courage and begged his captors to free up his hands a little, adding that he’s a father of three. But police officers further tightened the hold until he lost consciousness.

He and others were driven to a detention center in the city of Zhodzina, but he was the only one who had to stay longer in the police van. “I was told to kneel, then get on my feet, but I lost my balance.” They leaned him against a wall and pummeled his head, chest, stomach and legs, Samalazau says. “I was thrown out of the van and made to kneel until they called my surname. Once again, masked officers said they would be paying extra attention to me.”

Kacper Sienicki, a Polish freelance journalist, was arrested in central Minsk on August 10. “I was walking alongside a photojournalist, who happens to be my friend,” he says. Out of the blue, they were taken by bus to a police van, and then transferred to a police station. “Once there, we were beaten and insulted based on our nationality. We were accused of being puppet masters, orchestrating the protest movement and organizing a color revolution.” Sienicki, who was based in Warsaw, had traveled to Belarus to cover the election for Polish audiences back home. But instead, he was snatched from the streets and locked up at the Zhodzina detention center for some 72 hours.

He was beaten on the way to the police station. His friend was beaten on the bus until he lost consciousness. “But the beatings were worst at the police station; my hands were tied behind my back and I was laid on the ground, face down.” They could not move, and officers threatened to punch their teeth out. They were made to kneel, face down. Sienicki says at that stage, his legs went numb.

The journalist says anyone who could not handle the abuse was beaten with a baton. “We were taken to the hallway and beaten. We heard peoples’ screams and saw bloodstains.” He says officers were wielding baseball bats, leaving those detained uncertain about would they would suffer yet more abuse. “We were denied water and food, prevented from sleeping, and not permitted to use the toilet.”

Valery Samalazau and Kacper Sienicki are among the 10 individuals who have tasked German lawyers with taking legal action against Belarus leader Alexander Lukashenko. They accuse him of having ordered his security forces to use brutal force to crack down on civilians.

The lawyers argue that the 10 individuals were tortured during their arrest in Belarus. As no legal action has been taken inside Belarus against security personnel, or Lukashenko, the lawyers hope an independent court case could be launched in Germany.

Germany’s Belarus community has documented more than 100 cases of violent abuse over the opposition protests. “Several of the victims reside in Germany, others are still in Belarus. We’re in contact with many initiatives to reach out to these people,” Anton Malkin, of theBelarus diaspora, tells DW.

No legal action in Belarus

Valery Samalazau says he spent 84 hours remanded in custody before he was released. He was then hospitalized for two weeks to treat a head and arm injury. He has documents confirming his pre-trial detention and hospitalization, yet none about his arrest.

“There was no police record, they found nothing on my case, not even in Zhodzina — there was no court case.”

Kacper Sienicki wants to see the Lukashenko government classified as a terrorist regime. “That’s why I will participate in this legal action and testify. I want justice for the people of Belarus and for myself.” The journalist hopes the case will draw further attention to Belarus and its repressive regime. Kacper also wants the people of Belarus to know they can call on foreign courts to seek justice.

According to official data, some 1,800 complaints have been filed in Belarus over the heavy-handed crackdown on protesters last summer. Not a single court case ensued. In addition to Germany, complaints have also been reported in Lithuania, Poland and the Czech Republic, where these countries are also planning to launch legal inquiries into the regime’s conduct.

Lukashenko has slammed the torture trial in Germany as “a dumb move.”

In March 2021, the United Nations Human Rights Council (UNHRC) passed a special resolution on Belarus that will see the UN document crimes against humanity committed in the country and gather evidence to perpetrators to justice.