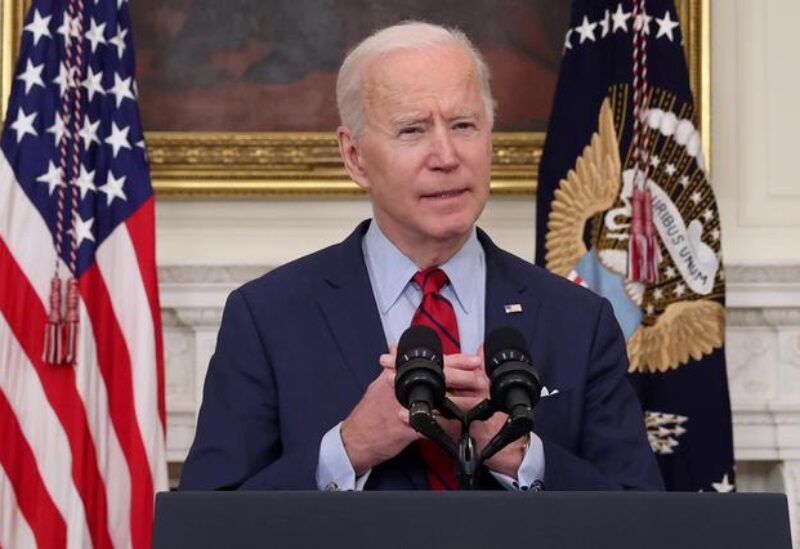 FILE PHOTO: U.S. President Joe Biden speaks about the mass shooting in Colorado from the State Dining Room at the White House in Washington, U.S., March 23, 2021.

U.S. President Joe Biden is expected on Thursday to lay out a new goal for U.S. vaccinations against the coronavirus at his first formal White House news conference, where topics will likely include immigration, gun control, infrastructure and foreign relations.

The Democratic president, who has taken questions from reporters in other settings since taking office on Jan. 20, may face sharp queries on a recent rise in asylum seekers at the U.S.-Mexico border, plans to share COVID-19 vaccines with other countries, and efforts to keep U.S. citizens safe from mass shootings.

Aides have been drafting possible questions and answers for Biden in recent days to brace for the Thursday event, slated to begin at 1:15 p.m. (1715 GMT).

Just a few dozen journalists from news outlets selected by the White House Correspondents’ Association will be on hand in the East Room, due of restrictions related to the global pandemic.

Biden’s news conference is expected to offer a sharp contrast to the marathon sparring sessions his predecessor, Donald Trump, held with reporters, where the Republican president’s insults and off-the-cuff remarks regularly made news. Ratings for the major cable television networks have dwindled since Trump left the White House.

78-year-old Biden is the oldest person to take office as U.S. president, and his political foes will be looking for signs he has become less sharp with age.

Biden’s popularity has remained high in his first 2 months in office, after a $1.9 trillion stimulus package passed Congress and millions were vaccinated against COVID-19 with at least one shot of a coronavirus vaccine.

A March 17-18 Reuters/Ipsos poll revealed that 59% of adults in the U.S. approve Biden’s overall job performance and 35% disapprove.

Last week, the president announced that his goal of having 100 million vaccine doses administered was being met early and vowed to announce a new goal this week, which he is likely to do on Thursday.

Biden will also face questions about his plans to advance gun control after two deadly mass shootings in less than a week. On Tuesday, he called for a ban on assault weapons and urged MPs to pass more stringent gun control measures, but Republican support for such action is low.

Biden’s next big legislative package could also come up. He is likely to unveil a roughly $3 trillion bill to boost U.S. infrastructure during a trip to Pittsburgh next week.