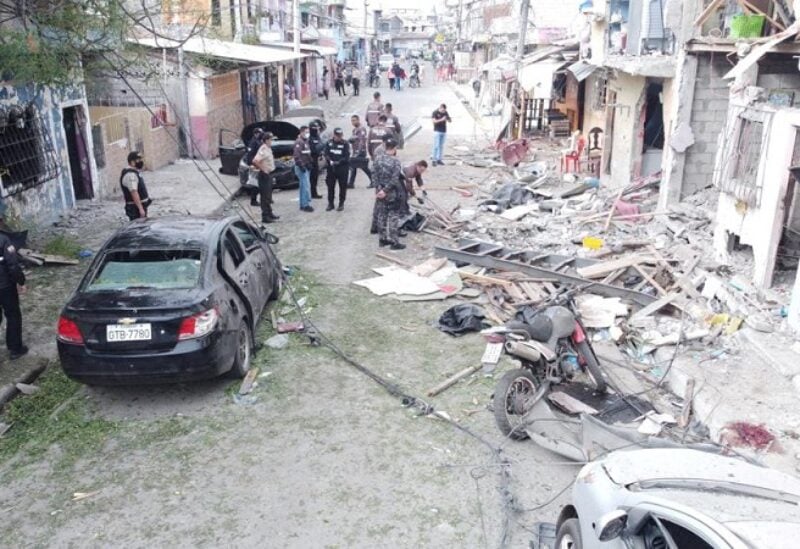 Members of the security forces check in the area of an explosion that left people injured and others dead and destroyed several houses and vehicles, according to local media reports,in southern Guayaquil, Ecuador August 14, 2022. Ecuador National Police/Handout via REUTERS ATTENTION EDITORS - THIS IMAGE WAS PROVIDED BY A THIRD PARTY. NO RESALES. NO ARCHIVES.

At least five people were and 16 others injured, due to an explosion in the port city of Guayaquil, Ecuador on Sunday.

During a press conference, Ecuador’s interior minister, Patricio Carrillo, said the attack was targeted at two locals known by the aliases “Cucaracha” and “Junior,” who are allegedly connected to the “Tiguerones” gang of organised criminals.
In Guayaquil, the nation’s second-largest city, where the blast destroyed eight homes and two cars, President Guillermo Lasso proclaimed a state of emergency.

On Twitter, Lasso issued a warning, saying that his one-year-old administration “will not allow organised crime to try to control the country.”
Security Secretary Diego Ordonez announced during a press conference that the coastal city will be under a state of emergency which would last for 30 days.30 days.
The five people who died have been recognised, according to Interior Minister Patricio Carrillo, and none had a criminal history.

Ecuador, which is situated between Colombia and Peru, the world’s two major producers of cocaine, is dealing with a drug-fueled crime wave that has resulted in horrifying sights like beheaded victims hanging from bridges.

At least 400 people have died in battles and massacres in Ecuadorian prisons since February 2021 as a result of tensions between rival drug gangs.

According to the most recent United Nations statistics, Ecuador was responsible for 6.5 percent of all the cocaine that was seized globally in 2020.