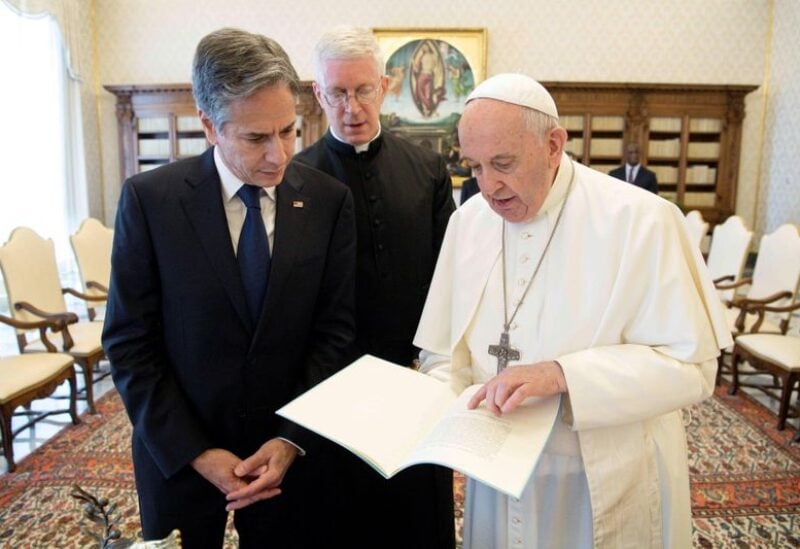 Pope Francis meets with U.S. Secretary of State Antony Blinken at the Vatican, June 28, 2021. Vatican Media/­Handout via REUTERS ATTENTION EDITORS - THIS IMAGE WAS PROVIDED BY A THIRD PARTY.

On Monday, Pope Francis met with US Secretary of State Antony Blinken in the aftermath of an American Catholic bishops’ decision to deny President Joe Biden communion.

Blinken became the highest-ranking US administration official to visit the Vatican since Biden’s inauguration in January, but it was unclear if the matter came up in discussions.

He held 40 minutes of private talks with the pope in the Vatican’s Apostolic Palace after a separate meeting with Secretary of State Cardinal Pietro Parolin and Archbishop Paul Gallagher, the Vatican’s foreign minister.

The visit follows a conference at which U.S. Roman Catholic bishops voted to draft a statement on Communion that may admonish Catholic politicians, including Biden, who support a woman’s right to abortion despite opposing the practice personally.

The bishops decided to move forward with the document, mostly disregarding a Vatican warning that it would be highly divisive.

The topic did not appear in statements by State Department spokesperson Ned Price and the Vatican and, when asked specifically at a news conference afterwards, Blinken would not be drawn.

He said the meeting with the pope was “extremely warm and very wide ranging” but he did not answer directly, saying that domestic politics was not part of his job.

Price said that Blinken in his talks with Parolin and Gallagher discussed various topics including human rights and religious freedom in China.

Since the Vatican and Beijing signed an agreement in 2018 on the naming of bishops in China, critics of the deal have appealed to the Vatican to speak out more about religious freedom in Hong Kong and mainland China.

Vatican spokesman Matteo Bruni said that the atmosphere was cordial and that it gave the pope a chance “to express his affection for and attention to, the people of the United States of America”.

The Vatican and the Biden administration agree on the dangers of climate change, which was a main point of contention with the White House while Donald Trump was president.

As he destroyed climate policy and controls on fossil fuels, Trump dismissed the issue.

The pope chastised Trump for withdrawing the United States from the 2015 Paris climate agreement. Biden’s return to the agreement was welcomed by the Vatican.

Blinken presented Pope Francis with a gold and silver sculpture of a dove grasping an olive branch, as well as copies of numerous of his works, including the landmark 2015 encyclical “Laudado Si” on environmental conservation.