Brutal blizzard leaves 31 dead in Buffalo, New York as it gears up for aftermath of storm 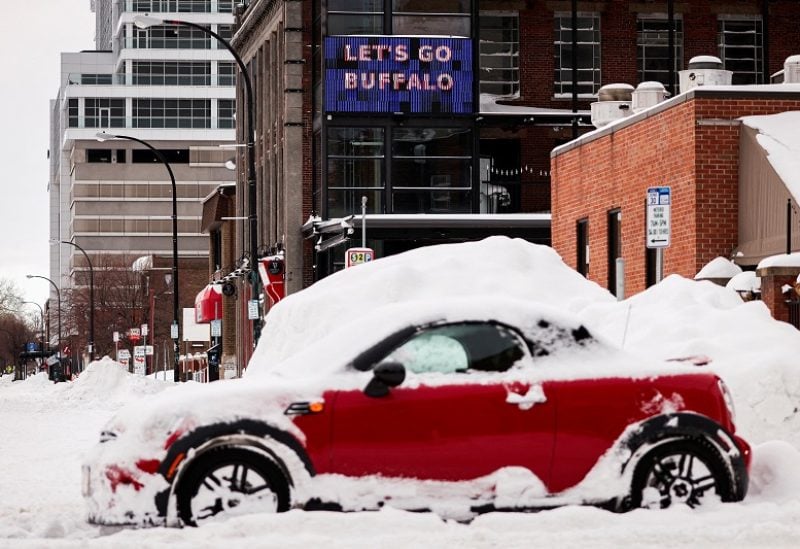 A "let’s go Buffalo" sign is seen behind an abandoned car on the road following a winter storm in Buffalo, New York, U.S., December 27, 2022. REUTERS/Lindsay DeDario TPX IMAGES OF THE DAY

Buffalo in New York, the worst hit by the current winter storm in the US, continues to struggle. At least 31 people have lost their lives in New York’s Erie County as the Buffalo was buried under up to 50.3 inches of snow. The death toll is still rising as rescue workers are checking homes and cars to look for anyone who was stranded in the storm.
The police department “expects that number to rise,” tweeted Byron Brown, mayor of the lakeside county’s biggest city Buffalo.
Power is out and more than 7,000 utility workers are working to restore electricity. They have a bunch of problems to deal with while doing so, including broken trees and poles.
There is demand for medical help and local health officials are arranging transportation for patients in need.
Business break-ins were reported in the area and the police have arrested at least eight people in connection with the burglaries. Roads are littered with hundreds of vehicles that were abandoned on the roads as the blizzard made driving impossible. Firefighters and other emergency vehicle are facing a tough time navigating through these vehicles.

Residents and commuters who tried to flee their freezing homes became trapped on highways and could not be rescued since several areas became inaccessible for several hours. Ambulances weren’t able to reach people and snow plows couldn’t remove snow due to the ferocity of the storm.
Buffalo is expected to see another half an inch of snow Tuesday night. While the temperatures will likely see a rise in the rest of the week, officials fear that it will lead to flooding. The weather service said that the risk of floods is small even though some rain is expected. However, “it should take around an inch of rain from this system before flooding becomes a concern”, officials said.