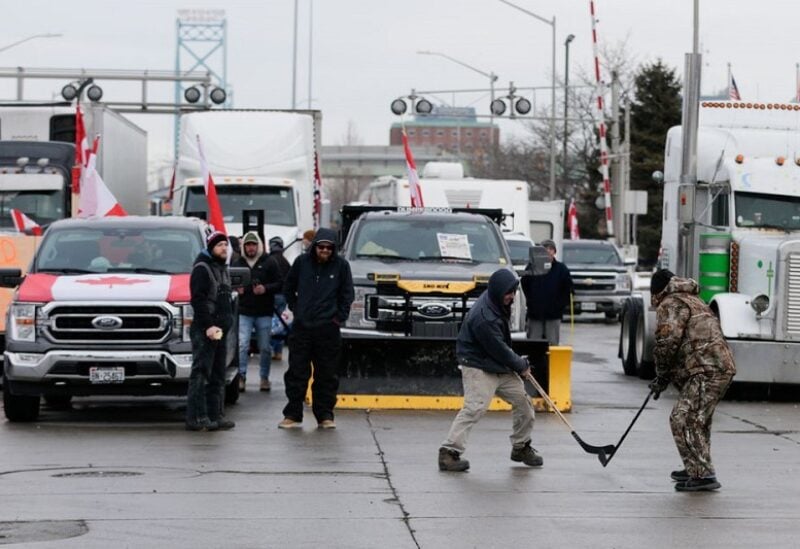 People play hockey while vehicles block the route leading from the Ambassador Bridge, linking Detroit and Windsor, as truckers and their supporters continue to protest against the coronavirus disease (COVID-19) vaccine mandates, in Windsor, Ontario, Canada February 9, 2022. REUTERS/Carlos Osorio

Canadian federal ministers on Wednesday urged protesters blocking two border crossings with the United States to return home before more damage is done to the economy, as the 13-day-old demonstration opposing pandemic measures dragged on.

The Ambassador Bridge, a key link used to move goods between the two countries, has been shut for inbound Canada traffic since Monday night, while another border crossing in Alberta has been closed in both directions since Tuesday night.

Starting as a “Freedom Convoy” occupying downtown Ottawa opposing a vaccinate-or-quarantine mandate for cross-border truckers mirrored by the U.S. government, the protest is about much more and has spread globally. Demonstrators have aired a litany of grievances encompassing COVID-19 health measures, a carbon tax and other legislation.

While police say the number of protesters in Ottawa is dropping, a blockade that start Monday at the vital Ambassador Bridge linking Canada and the United States is disrupting trade.

The bridge, one of the busiest border crossings on the continent, handling around 8,000 trucks a day, reopened on Tuesday for U.S.-bound vehicles, but the Canada Border Services Agency’s website showed lanes from the United States were still closed on Wednesday.

The protests were disrupting jobs and the economy’s supply chain and “must end before further damage occurs,” Canada’s Emergency Preparedness Minister, Bill Blair, told reporters in a press briefing on Wednesday.

“Everyone has the right to protest peacefully … but the economic and social harm that these protests are having here in Windsor and Ottawa and across Canada is quite significant,” Mayor Drew Dilkens told reporters at a briefing.

“This cannot be allowed to be sustained for any length of time. Action will have to be taken to reopen this bridge,” he said, adding that the city had asked for additional resources from federal and provincial governments to deal with the protests.

The bridge closure has already caused a shortage of parts at carmaker Stellantis’s (STLA.MI) assembly plant in Windsor, Ontario. The company said it had to end shifts early on Tuesday, but the plant was able to resume production Wednesday morning.

“We continue to know that science and public health rules and guidance is the best way to this pandemic is the way we’re going to get to the other side,” Prime Minister Justin Trudeau told reporters as he entered a Liberal caucus meeting on Wednesday.

Downtown residents criticized police for their initially permissive attitude toward the blockade in Ottawa, but authorities began trying to take back control Sunday night with the seizure of thousands of liters of fuel and the removal of an oil tanker truck.

Protesters say they are peaceful, but some Ottawa residents have said they were attacked and harassed. Criminal investigations are under way into, among other things, attempted arson at a downtown apartment building.

While tougher policing has dissuaded some demonstrators, Deputy Police Chief Steve Bell has said many of those remaining in Ottawa were highly “determined and volatile.” Police have made 23 arrests so far.

Police have asked for reinforcements – both officers and people with legal expertise in insurance and licensing – suggesting intentions to pursue enforcement through commercial vehicle licenses.

The office of Canada’s public safety minister, Marco Mendicino, confirmed on Tuesday that they were in talks to provide more officers as well as tactical troops, joint intelligence and community liaison teams.