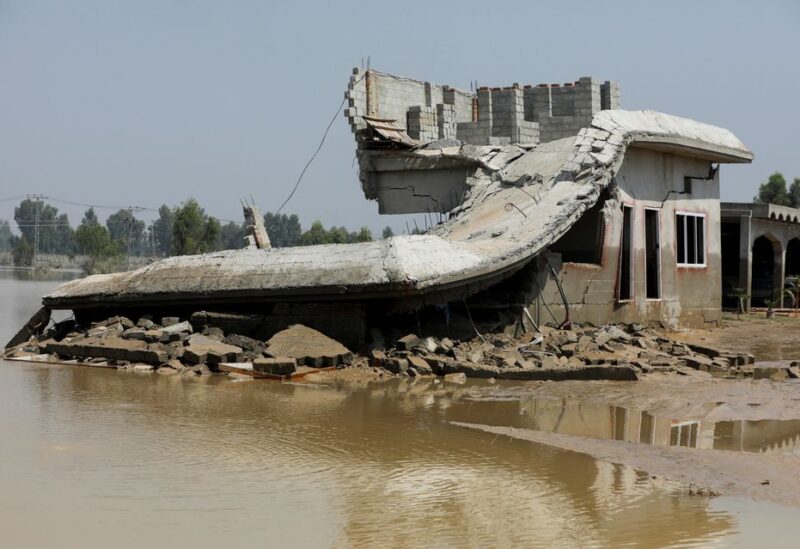 A general view of a collapsed building, following rains and floods during the monsoon season in Nowshera, Pakistan August 30, 2022. REUTERS/Fayaz Aziz

Torrential rains and flooding have inundated a third of Pakistan, killing over 1,100 people, including 380 children, according to the United Nations, which issued an emergency appeal on Tuesday for what it called a “unprecedented climatic calamity.”

“One third of the country is literally under water,” Climate Change Minister Sherry Rehman told Reuters, describing the scale of the disaster as “a catastrophe of unknown precedent”.

She said the water was not going to recede anytime soon.

At least 380 children were among the dead, Prime Minister Shehbaz Sharif told reporters during a briefing at his office in Islamabad.

“Pakistan is awash in suffering,” U.N. Secretary-General Antonio Guterres said in a video message, as the United Nations launched an appeal for $160 million to help the South Asian nation. “The Pakistani people are facing a monsoon on steroids – the relentless impact of epochal levels of rain and flooding.”

Guterres will head to Pakistan next week to see the effects of the “unprecedented climate catastrophe,” a U.N. spokesperson said.

He said the scale of the climate disaster commanded the world’s collective attention.

Nearly 300 stranded people, including some tourists, were airlifted in northern Pakistan on Tuesday, a state-run disaster management agency said in a statement, while over 50,000 people were moved to two government shelters in the northwest.

“Life is very painful here,” 63-year-old villager Hussain Sadiq, who was at one of the shelters with his parents and five children, told Reuters, adding that his family had “lost everything.”

Hussain said medical assistance was insufficient, and diarrhoea and fever common at the shelter.

The United States will provide $30 million in support for Pakistan’s flood response through USAID, its embassy in Islamabad said in a statement, saying the country was “deeply saddened by the devastating loss of life, livelihoods, and homes throughout Pakistan.”

Early estimates put the damage from the floods at more than $10 billion, the government said, adding the world had an obligation to help Pakistan cope with the effects of man-made climate change.

The losses are likely to be much higher, said the prime minister.

Torrential rain has triggered flash floods that have crashed down from northern mountains, destroying buildings and bridges, and washing away roads and standing and stored crops.

Colossal volumes of water are pouring into the Indus river, which flows down the middle of the country from its northern peaks to southern plains, bringing flooding along its length.

Guterres said the $160 million he hoped to raise with the appeal would provide 5.2 million people with food, water, sanitation, emergency education and health support.

Prime Minister Sharif said that amount of aid would need “to be multiplied rapidly,” pledging that “every penny will reach the needy, there will be no waste at all.”

Sharif feared the devastation would further derail an economy that has already been in turmoil, possibly leading to an acute food shortage and adding to skyrocketing inflation, which stood at 24.9% in July.

Wheat sowing could also be delayed, he said, and to mitigate the impact of that, Pakistan was already in talks with Russia over wheat imports.

General Akhtar Nawaz, chief of the national disaster agency, said at least 72 of Pakistan’s 160 districts had been declared calamity-hit.

“The situation is likely to deteriorate even further as heavy rains continue over areas already inundated by more than two months of storms and flooding,” he said.

Guterres appealed for a speedy response to Pakistan’s request to the international community for help, and called for an end to “sleepwalking towards the destruction of our planet by climate change.”

“The extreme monsoon flooding tells us that there is no time to waste, the climate tipping point is here,” said Rehman, the climate change minister, adding Pakistan is looking for the developed world to not let it pay for other countries’ carbon-backed development.