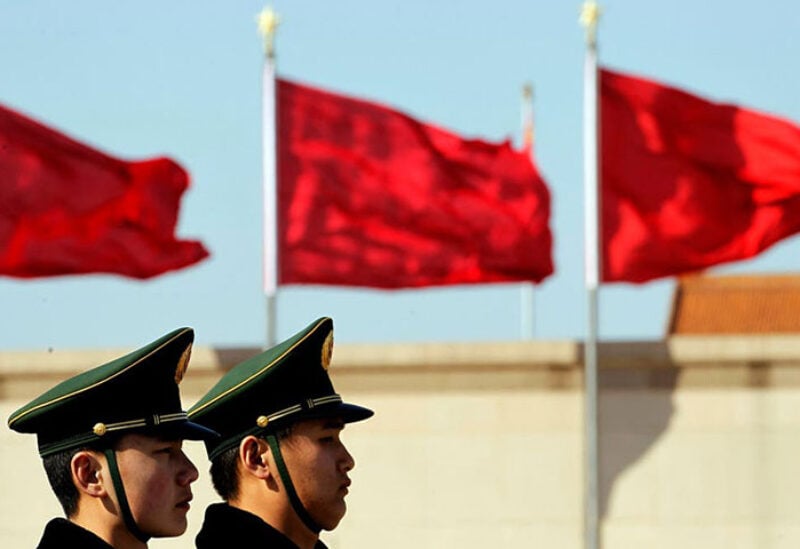 Chinese paramilitary police stand on duty near flags during the fourth plenary session of the National People's Congress held in the Great Hall of the People in Beijing, China

China is standing firm on retaliatory sanctions that led Europe to halt a landmark investment deal, in the latest sign that Beijing is willing to sacrifice economic opportunities to safeguard its “core interests”.

European lawmakers overwhelmingly approved a resolution Thursday to stop ratification of the Comprehensive Agreement on Investment with China, so long as its “baseless and arbitrary penalties” were in place. China afterward reaffirmed its decision to sanctions members of the same body it was counting on to enact the deal reached in December following seven years of negotiations.

“China’s decision to take countermeasures is a legitimate response to the EU’s unilateral sanctions and confrontation, a spokesperson for China’s mission to the EU said. “The China-EU investment agreement is a balanced agreement that benefits both sides. It is not a gift given by one side to the other.”

The agreement has long faced resistance from China’s critics in the European Parliament, with opponents demanding greater protections against forced labor. Tensions escalated in March, when China retaliated against Western sanctions over human-rights practices in the country’s Xinjiang region by announcing measures against 10 individuals and four entities from Europe.

The deterioration of the agreement shows the challenge China faces in maintaining pragmatic economic ties with the West while attempting to draw a harder line in ideological disputes. Chinese President Xi Jinping and his top diplomats have repeatedly warned that they will no longer tolerate interference in what they see as their internal affairs and have vowed to hit back against foreign sanctions.

Wang Yiwei, director of Renmin University’s Center for European Studies and a former Chinese diplomat in Brussels, dismissed the European freeze as an “emotional response and predicted the bloc would eventually return to the table. The retaliation had successfully deterred Europe from making more moves against China regarding Hong Kong and Taiwan, he said.

“The Chinese retaliation came as a surprise to the Europeans as they didn’t expect the escalation”, Wang said. “The EU needs some time to cool down their emotions to realize how significant the CAI is to them, because what’s been agreed — after Xi’s personal involvement — is something they have been dreaming of.”

The investment pact had been seen as proof of both Europe’s independence from the US and China’s ability to collaborate with American allies who adopted a more moderate approach. The freeze will now be listed among a series of setbacks for Beijing since President Joe Biden took office, pledging greater collaboration with Europe. Biden is preparing to visit the continent next month in his first foreign trip.

Attitudes in several European capitals have grown less favorable toward China since the coronavirus outbreak fueled a range of diplomatic disputes. The rise of the more China-skeptic Green Party in Germany — a bastion of support for closer economic ties with Beijing — also presents a potential hurdle.

Much of global criticism toward China has focused on its treatment of Muslim Uyghurs and other minorities in Xinjiang. A panel of United Nations experts in 2019 said an estimated 1 million people have been sent to internment facilities in the region, part of a set of policies the US has said amounts to genocide.

China has waged a vigorous international campaign against the claims, saying it’s trying to fight terrorism and improve the livelihoods of minorities.

“We hope the European side could take a lesson from this”, Foreign Ministry spokesman Zhao Lijian told a regular briefing Wednesday after reports that European lawmakers in Brussels would block the agreement.

“The European Parliament action will just put a label on what was already clear since China imposed supersized sanctions on European parliamentarians,” Wuttke said. “CAI took seven years to negotiate. Unfortunately, it might take another seven to be ratified.”