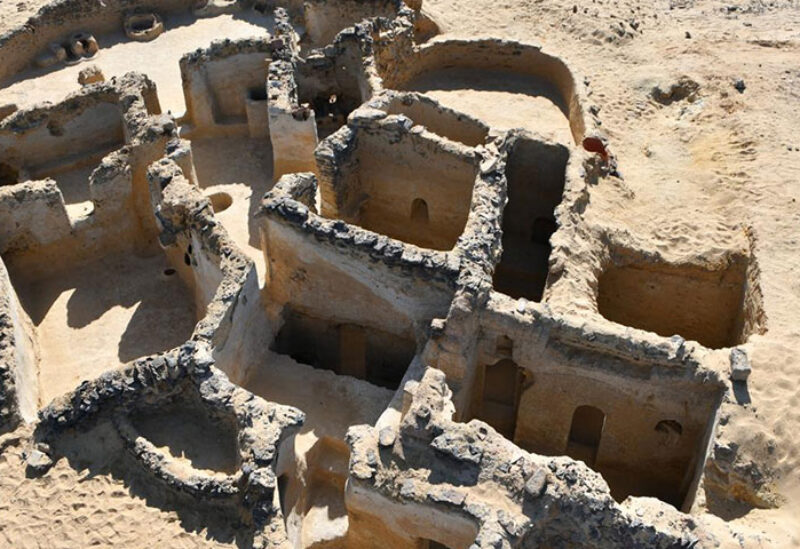 Ruins of a Christian settlement  were discovered by a French-Norwegian archaeological team in Egypt’s Western Desert.

The find reveals monastic life in the region in the fifth century AD, the Egyptian Antiquities Ministry said on Saturday.

“The French-Norwegian mission discovered during its third excavation campaign at the site of Tal Ganoub Qasr Al Agouz in the Bahariya Oasis several buildings made of basalt, others carved into the bedrock and some made of mud bricks,” it said.

The complex comprises “six sectors containing the ruins of three churches and monks’ cells”, in which “walls bear graffiti and symbols with Coptic connotations”, said Osama Talaat, head of Islamic, Coptic and Jewish Antiquities at the ministry.

Mission chief Victor Ghica said the 19 structures and a church were discovered carved into the bedrock in 2020.

The church walls were decorated with “religious inscriptions” and biblical passages in Greek, revealing “the nature of monastic life in the region”, Ghica said.

It clearly showed that monks were present there since the fifth century AD, he said.

The remote site, in the desert south-west of the capital Cairo, was occupied from the fourth to eighth centuries, with a likely peak of activity in the fifth and sixth centuries, according to the French Institute for Oriental Archaeology. It was in charge of the mission.

The walls of some of the unearthed structures bore Greek inscriptions in yellow ink, reveals Dr Talaat.

The first of the six sections which consisted of the remains of a large church, its dining hall, and monks’ residences, also contained a number of ostraca, potsherds used as a writing surface during the Hellenistic period.

The ostraca bore Greek inscriptions and are believed to date back to the fifth and sixth centuries AD.

Dr Ghica explained that this is an important discovery for Egypt as it reveals vital information about urban planning at the time.

The ministry’s statement reaffirmed Dr Ghica sentiments, adding that this find is an important window into Coptic monastic living in Egypt at the time.