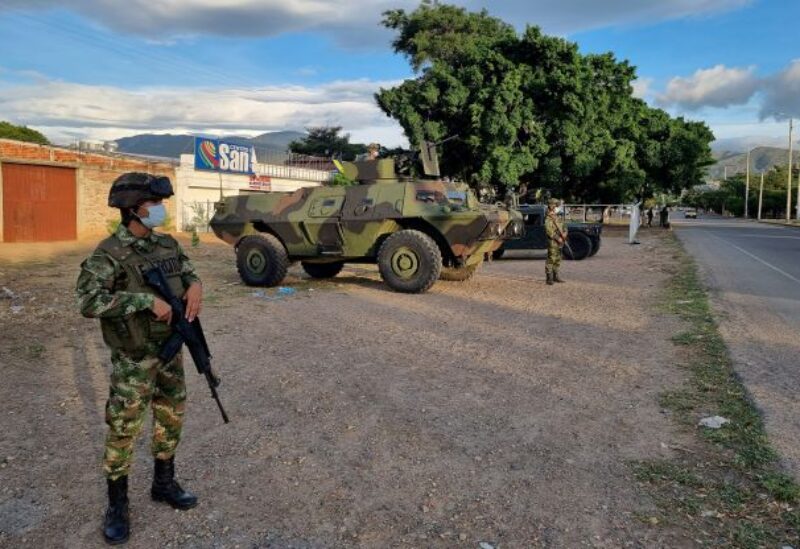 The soldiers are part of a 14,000-strong military brigade formed last month to combat escalating bloodshed in Colombia’s northern region of Norte de Santander, which has become the country’s new focus of conflict, spurred by increased cocaine production.

“Any of the illegal armed organizations in this area involved in drug trafficking might attack us,” their sergeant, a 20-year army veteran, said under the shade of a tree near a river that separates Colombia and Venezuela.

Vulnerable to mines, snipers and ambushes, 16 soldiers have died this year in around 30 attacks in Norte de Santander.

Nineteen members of illegal armed groups have also died and dozens of soldiers, rebels and gang members been injured, according to Defense Ministry figures.

The military surge and sacrifice may not be the right tactic though: eradication of coca leaves, the raw ingredient for cocaine, is actually falling amid resistance from locals who say they have few other viable options to live off.

Furthermore, Colombia’s army has a checkered history, at times committing rights abuses while opposing rebels, traffickers and criminal gangs for more than half a century.

President Ivan Duque’s government is furious with Venezuela, accusing President Nicolas Maduro’s administration of providing a safe haven for gangs over the border and conniving in drugs shipments to the United States and Europe for a cut of profits.

Colombia hopes the troop buildup in Norte de Santander will provide a roadmap for pacifying other parts of a nation whose long civil war has now fractured into local battles against transnational insurgents and criminals.

A porous frontier and weak law enforcement in Venezuela allow guerrillas from the ELN and dissident Revolutionary Armed Forces of Colombia (FARC) rebels – who reject a 2016 peace agreement – to strike and then flee across the border, he added.

About half the ELN fighters and 30% of the FARC dissidents operate from there, protected from bombing raids, Navarro said.

On the Colombian side, groups fight each other for control of rising coca production. One area, Catatumbo, now has capacity to produce 312 tonnes of cocaine per year, a quarter of Colombia’s output, according to U.N. data.

Murders in Norte de Santander rose to 576 last year, compared with 539 in 2019. Through September 2021, 436 people have been slain, according to the defense ministry.

Twenty-two human rights activists have been assassinated since the beginning of 2020, while fighting has displaced some 6,500 people, according to activist groups.

In two brazen attacks in June, former rebels bombed a military barracks in regional capital Cucuta and a sniper tried to shoot down a helicopter carrying Duque and other officials.

A FARC dissident commander took responsibility for the attacks, saying they targeted the U.S. presence.

The recent capture of “Otoniel”, leader of a major gang called the “Gulf Clan”, may not stem violence by his group, which police say has alliances with criminals in more than two dozen countries. The arrest might even increase fighting, regional analysts say, as the gang retaliates against security forces or members fight for power among themselves.

The military says increased troops – with on-the-ground U.S. military advisors – will go hand-in-hand with investments in roads, schools and other programs.

But there are detractors.

Activists say boots on the ground mean little without anti-poverty measures and more support for voluntary substitution of coca crops. “It’s proven it’s a failure to insist on militarizing territory as the only answer,” said Fundacion Progresar’s Canizares.

It is indefensible that murders, mass killings, displacements and drug trafficking continue despite a large, long-term military presence in the province, he added.

Farmers outside the municipality of Tibu, home to Colombia’s largest coca plantations, recently held 180 soldiers on an eradication mission hostage for several hours in protest at removal of a crop that is one of few ways to make ends meet.

And eradication efforts overall in Norte de Santander are floundering, falling to about 30 square km so far this year, from 95 in 2020, largely due to opposition from locals.

Figures from the military and defense ministry also show the number of clandestine labs – usually deep in the jungle – destroyed in the first nine months of 2021 was 458, compared to 694 in 2020.

As locals clamor for land titles, loans for crop-switching and more public works, authorities insist the security strategy will be backed by social investment.

For example, provincial governor Silvano Serrano, with help from the national government, is spending $8 million on a program to encourage cacao production. It will give farmers seeds, technical assistance and guaranteed, fixed-price sales.