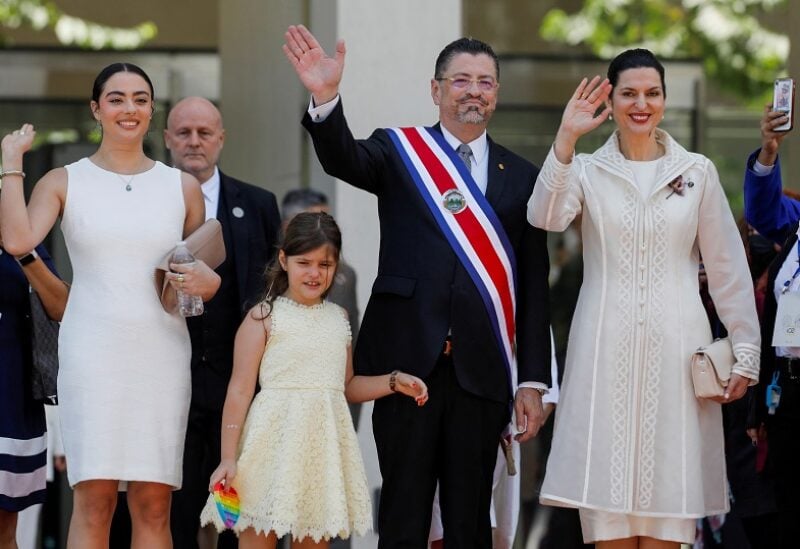 Rodrigo Chaves waves with his daughters, Tatiana Chaves, Isabella Chaves, and his wife Signe Zeicate after his swearing-in ceremony as Costa Rica's new President outside the Legislative Assembly building, in San Jose, Costa Rica May 8, 2022. REUTERS/Monica Quesada NO RESALES. NO ARCHIVES

Promising to fight corruption and revive the economy, Costa Rica’s new president Rodrigo Chaves was sworn in on Sunday.

The former World Bank economist won a four-year term last month in a runoff with former President Jose María Figueres, himself tainted by a corruption scandal.

The party of Chaves’ predecessor Carlos Alvarado was almost obliterated during the first-round election in February, receiving no seats in the new Legislative Assembly.

Chaves’ Social Democratic Progressive Party has only 10 of 57 seats in the legislature and he turned out to be a surprise qualifier for the runoff, having come fourth in the first round.
Shortly after being given the ceremonial presidential sash, Chaves lashed out at the state of the nation, complaining of the high cost of living, crime, drug trafficking and long lines at social security offices.

He warned that “if the political class fails one more time, the country could fall apart.”

“We will not only put the house in order, we will rebuild it,” Chaves vowed. “Change is urgently needed. I will not accept defeat. Costa Rica does not have to accept defeat.”

Promises on women’s rights
Chaves also promised to stamp out gender discrimination and the abuse of women, as feminist groups protested nearby.

Their rally was a reminder to the 60-year-old former finance minister about allegations of sexual harassment that prompted his resignation from the World Bank.

An internal investigation found that from 2008 to 2013, Chaves made unwelcome comments about physical appearances and unwelcome sexual advances toward multiple bank employees.

Spain’s King Felipe VI and other heads of state or government and delegations from nearly 100 countries traveled for the inauguration.

Shortly after his address, Chaves signed his first decrees, including scrapping obligatory mask-wearing for most people.