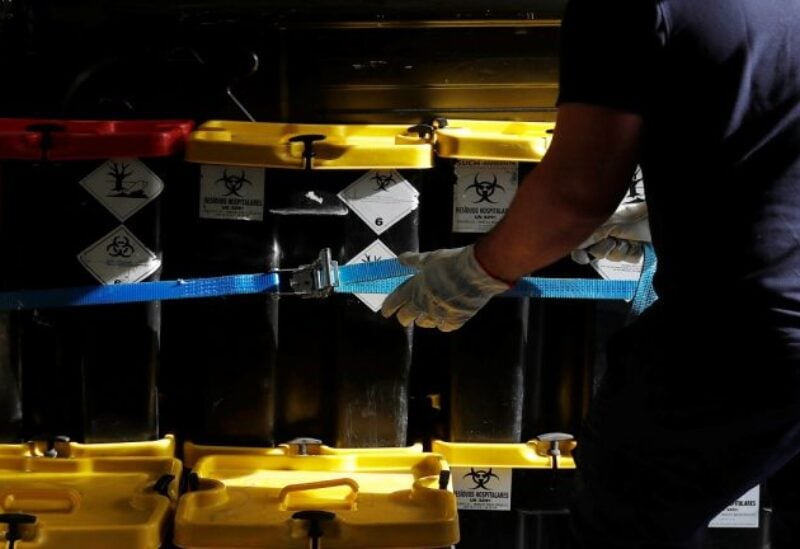 Every day, as more people get their coronavirus vaccine jabs, millions of needles, syringes and tiny vials are thrown away globally.

Inoculating the entire population of the United States, for instance, would require so many needles they would stretch around the earth 1.8 times, according to California-based OnSite Waste Technologies.

Experts caution that medical waste firms risk becoming overwhelmed by the sheer volume of debris and several environmentalists are calling for more sustainable solutions as the vaccine rollout accelerates.

In central Portugal, in a large warehouse with a burning hot incinerator, workers sort through bins marked “hazardous waste” arriving by the truckload from vaccination centers.

“The number of people getting shots will increase substantially… This means we have to step up our response,” said Adelino Mendes, manager of Ambimpombal waste firm.

The facility houses one of only two medical waste incinerators in Portugal.

According to Carlos Filho, head of the Rotterdam-based International Solid Waste Association (ISWA), Portugal has so far managed to handle the trash from its vaccine program but capacity constraints are a structural problem everywhere.

“An unexpected pandemic showed that the world did not have the necessary infrastructure to cope with an increase in waste,” Filho said.

Over the last year, reuse firms have had to handle rising amounts of trash – from medical masks to food delivery boxes.

France’s Suez, one of the world’s largest waste management firms, said the volume of medical trash it processed at its plant in the Netherlands tripled last year from 2019.

Stericycle, which operates in countries like Britain and the United States, said it saw an “unprecedented” surge.