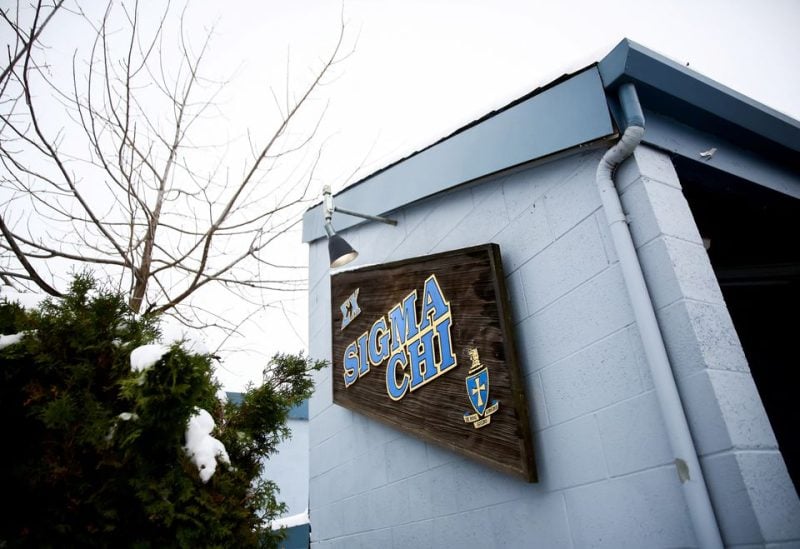 The Sigma Chi fraternity house, where victim Ethan Chapin was a member, is pictured after four University of Idaho students were found killed in their residence on November 13 in Moscow, Idaho, U.S., November 30, 2022. REUTERS/Lindsey Wasson

Officials said on Friday that a graduate student pursuing a criminal justice degree at Washington State University was arrested and charged with first-degree murder in the stabbing deaths of four University of Idaho students more than six weeks ago.

According to James Fry, chief of police in Moscow, Idaho, where the University of Idaho campus is located, police in eastern Pennsylvania acting on a fugitive arrest warrant apprehended Bryan Christopher Kohberger, 28, on Thursday night. Fry stated that Kohberger lives in Pennsylvania.

Kohberger was arraigned in Pennsylvania and remained jailed without bond awaiting a hearing on Tuesday to determine whether he will waive extradition and return voluntarily to Idaho to face charges in the high-profile case, said Latah County, Idaho, prosecutor Bill Thompson.

Thompson said Kohberger was charged with four counts of first-degree murder and felony burglary in a crime that unnerved the small college town in Idaho’s northwest panhandle where the four victims – three women and a man in their early 20s – were slain.

The four were all found fatally stabbed on the morning of Nov. 13 inside the off-campus house where the three women lived, two of them staying in one room, and one sharing her room with the fourth victim, her boyfriend.

Two other female roommates in the house at the time were unharmed, apparently sleeping through the killings. Police said the cellphone of one of the survivors was used to call emergency-911 when the bodies were first discovered.

“This is not the end of this investigation. In fact it is a new beginning,” Thompson told a news conference.

The victims – identified as Ethan Chapin, 20, of Conway, Washington; Xana Kernodle, 20, of Avondale, Arizona; Madison Mogen, 21, of Coeur d’Alene, Idaho; and Kaylee Goncalves, 21, of Rathdrum, Idaho – all suffered multiple stab wounds, Fry said. Some of the bodies also showed defensive wounds, Fry said, suggesting they had tried to fend off their attacker.

NIGHT OUT BEFORE KILLINGS

Chapin and his girlfriend, Kernodle, had attended a fraternity party the night before, while Mogen and Goncalves, who were best friends, had visited a local bar and food truck. Both pairs returned to the house shortly before 2 a.m. The two other roommates had gotten home about an hour earlier.

Authorities say they believe the slayings occurred between 3 and 4 a.m. on Nov. 13.

The victims appeared to have been killed with a knife or some other “edged” weapon, police have said. Fry said the murder weapon has not been recovered, though police had found a car they were searching for in connection with the killings.

Authorities said Kohberger was a graduate student at Washington State University (WSU) in Pullman, Washington, about 10 miles from the University of Idaho campus.

WSU issued a statement on Friday saying its police department and Idaho law enforcement officers searched both Kohberger’s apartment residence and his office on campus.

It said Kohberger “had completed his first semester as a PhD student in WSU’s criminal justice program earlier this month,” suggesting he had remained on campus, just miles away from the crime scene across the Idaho state line, for a number of weeks before returning to Pennsylvania.

Asked at the press conference in Moscow whether authorities there were seeking additional suspects, Fry said, “We have an individual in custody who committed these horrible crimes, and I do believe our community is safe.”

Fry said his department had received more than 19,000 tips from the public and had conducted more than 300 interviews as part of its investigation, assisted by state police and the FBI. He and Thompson urged anyone who knew anything about the accused killer to come forward.

He declined to offer a possible motive for the crime or to give any details about the investigation, such as how authorities traced Kohberger to Albrightsville, Pennsylvania, a small community in the Pocono Mountains resort region about 90 miles north of Philadelphia, where he was arrested.

Thompson said more details would emerge publicly from a probable-cause affidavit that summarizes the factual basis for the charges but remains under court seal until the suspect is physically back in Idaho to be served his arrest warrant.