Declassified report shows US predictions of IS group threat 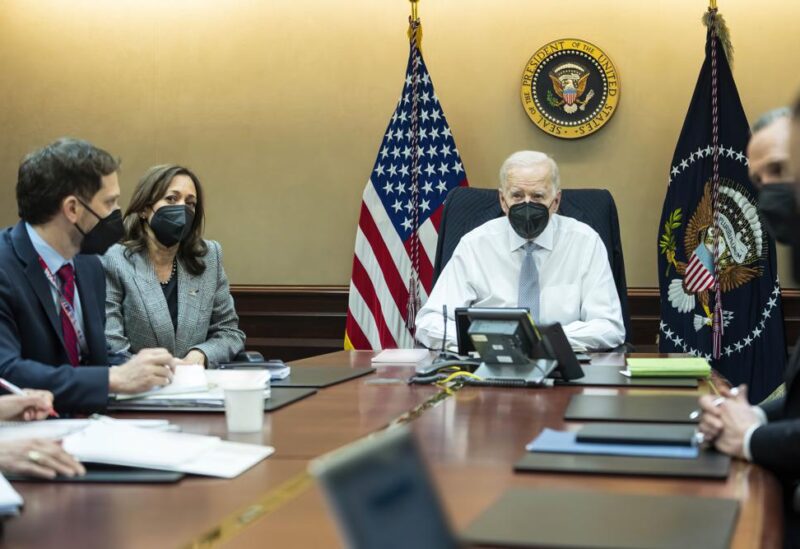 In this image provided by The White House, President Joe Biden and Vice President Kamala Harris and members of the President's national security team observe from the Situation Room at the White House in Washington, on Feb. 2, 2022, the counterterrorism operation responsible for removing from the battlefield Abu Ibrahim al-Hashimi al-Qurayshi, the leader of the Islamic State group. Biden and top national security officials have cited the recent strike killing al-Qaida head Ayman al-Zawahri as evidence that America maintains an “over-the-horizon” counterterrorism capacity in Afghanistan after the withdrawal. (Adam Schultz/The White House via AP, File)

U.S. intelligence officials predicted two years ago that the Islamic State group would likely regain much of its former power and global influence, especially if American and other Western forces reduced their role in battling the extremist movement, according to a recently declassified report.

Many of the conclusions in the 2020 report, according to analysts, still hold true today, especially in light of the group’s recent resurgence in Afghanistan following President Joe Biden’s withdrawal of American forces last year.

The Islamic State group is no longer controlling huge swaths of territory or staging attacks in the United States as it did several years ago before a major U.S.-led offensive. But it is now slowly rebuilding some core capabilities in Iraq and Syria and increasingly fighting local governments in places including Afghanistan, where an affiliate of the IS group, also known by the acronym ISIS, is fighting the ruling Taliban following the U.S. withdrawal.

“If the United States and our partners pull back or withdraw further from areas where ISIS is active, the group’s trajectory will increasingly depend on local governments’ will and capability to fill the resulting security voids,” says the report, originally published in classified form in May 2020, months after then-President Donald Trump’s administration reached an agreement with the Taliban to pull out American troops.

Biden and top national security officials have cited the recent strike killing al-Qaida head Ayman al-Zawahri as evidence that America maintains an “over-the-horizon” counterterrorism capacity in Afghanistan after the withdrawal. U.S. special forces also killed the head of the Islamic State group in a February raid in northwest Syria.

“The fact of those operations are, I think, reflective how serious this threat environment remains,” said Christy Abizaid, director of the National Counterterrorism Center, on Thursday. But she added that analysts believe the terrorist threat to the U.S. homeland is “less acute than we’ve seen it” at any time since the Sept. 11, 2001, attacks.

Analysts have recently seen growth in IS group branches around the world, particularly in Africa, said Abizaid, who spoke at the Intelligence and National Security Summit outside Washington.

“Afghanistan is a really interesting story along those lines about where the ISIS affiliate is and how we continue to be concerned about it,” she said.

Some outside analysts say al-Zawahri’s apparent presence in downtown Kabul suggests that extremist groups are more comfortable operating in Afghanistan — and that it will be tougher to counter the Islamic State group as it grows across the country.

Bruce Hoffman, senior fellow for counterterrorism at the Washington-based Council on Foreign Relations, called the May 2020 report “very clear-eyed and forthright.”

“It’s very different operating against ISIS in the isolated mountain redoubts or deep valleys of Afghanistan,” he said. “The advantages that enabled us to so brilliantly take out al-Zawahri, I would guess, are absent outside of Kabul.”

While the White House last month released declassified points from an intelligence assessment saying al-Qaida had not reconstituted in Afghanistan, the points did not address the Islamic State in Khorasan, the local IS group affiliate. IS-K was responsible for killing 13 U.S. troops outside the Kabul airport during the withdrawal and has continued to mount an insurgency against the Taliban now in control of the country.

The National Security Council said in a statement that the U.S. is working to deny “ISIS-K access to financing, disrupt and deter foreign terrorist fighters from reaching Afghanistan and the region, and counter ISIS-K’s violent extremism.”

The May 2020 report was declassified this August and published online last week by the U.S. Office of the Director of National Intelligence. The ODNI periodically declassifies and releases older intelligence assessments. A spokesperson for the ODNI’s National Counterterrorism Center declined to answer questions about the assessment or address the intelligence community’s current view on the Islamic State group.

The report predicts that the Islamic State group’s global branches are likely to increase its “capability to conduct attacks in many regions of the world, including the West.” The U.S. would more likely face attacks from people inspired by the group’s ideology than plots directed or supported by the group, the report said.

Pressure by local governments where the IS group is active and their international partners “almost certainly will shape the scale of ISIS’ resurgence in Iraq and Syria and its expansion worldwide,” the report said.

Experts commonly agree with the report’s predictions, said Colin Clarke, an expert on counterterrorism who is director of research for The Soufan Group, an intelligence and security consultancy. But top intelligence analysts would have been involved in drafting and reviewing the assessment, formally known as a national intelligence estimate, he said.

Clarke noted several recent IS-linked attacks in Afghanistan, including an apparent suicide bombing outside the Russian embassy in Kabul that killed two diplomats, as well as ongoing fighting between militants and U.S.-backed forces at a sprawling camp in Syria.

“There are some things that have happened in the last few weeks,” he said, “that make you wonder if the situation is not more dire than is being presented.”