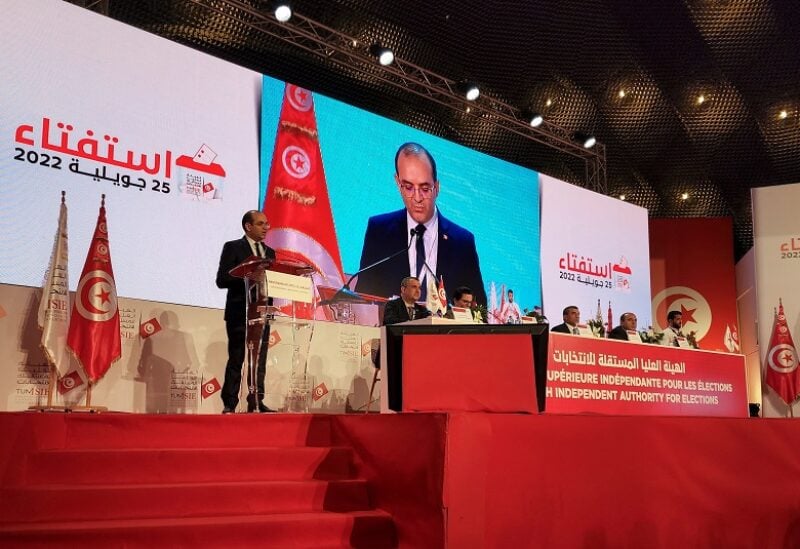 Farouk Bouasker, President of the Independent High Authority for Elections, speaks during the announcement of the preliminary results of a referendum on a new constitution in Tunis, Tunisia July 26, 2022. REUTERS/Tarek Amara

Following a thinly attended referendum in which voters largely supported the text, the electoral commission said that Tunisia had adopted a new constitution that gives President Kais Saied unrestricted power. Rivals of Saied claimed the referendum he organised on Monday was invalid and accused the Saied-controlled electoral body of “fraud.”

According to preliminary data, the electoral commission “announces the acceptance of the new draft constitution for the Republic of Tunisia” on Tuesday evening. On a turnout of 30.5%, 94.6% of valid ballots were cast in favour of the new constitution. A year ago on Monday, the president abruptly dismissed the government and suspended the legislature, dealing a severe blow to the only democracy to have survived the 2011 Arab Spring upheavals.
His actions alarmed some Tunisians who feared a return to authoritarianism, but they were welcomed by others who were tired of the country’s high unemployment and inflation rates, political corruption, and unsatisfactory system. There had been little question that the “yes” campaign would win, and an exit survey conducted by the unbiased polling organisation Sigma Conseil confirmed this.
The majority of Saied’s competitors demanded a boycott, and while participation was low, it was greater than the single figures most people had anticipated.