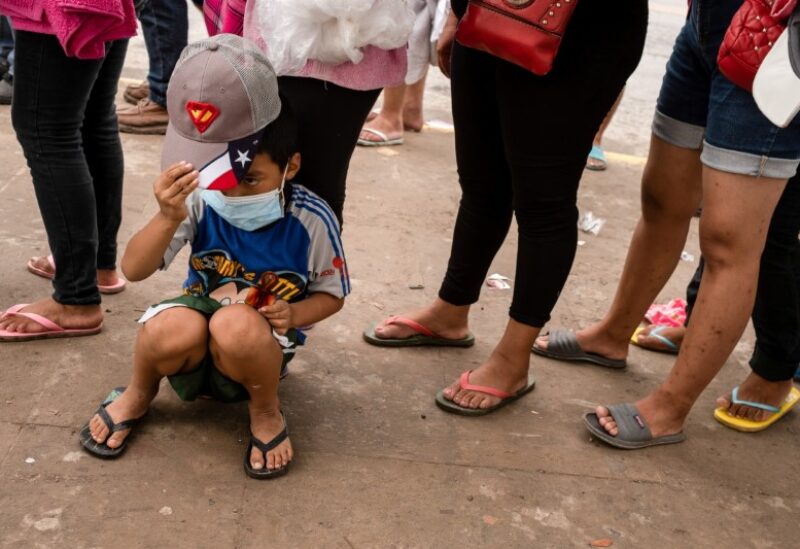 FILE PHOTO: An asylum-seeking migrant child from Central America, who were sent back to Mexico under Title 42 after crossing the border into the U.S. from Mexico, sits on the ground while being in a line to receive meals in a public square where hundreds of migrants live in tents, in Reynosa, Mexico, July 10, 2021. REUTERS/Go Nakamura

Melissa Pinedo, a 27-year-old Guatemalan single mother, has spent weeks in a tent in Reynosa, Mexico, just across the border from Texas, attempting to find someone to call about a rapidly closing window for requesting asylum in the United States.

“There are a lot of lawyers floating around, but no one responds. They’re overworked “In a phone interview, she stated.

Thousands of migrants in northern Mexico are being left with few options as the US government and non-profit organizations wind down a program that spared a small number of asylum seekers from a sweeping border expulsions policy.

Pinedo said she and her brother witnessed the gang murder of a shopkeeper who failed to pay extortion fees two years ago. Gang members tracked down her brother and killed him a month later, she said. She escaped to a different neighborhood.

But she decided to flee northward with her 8-year-old daughter earlier this year after gang members found her and tried to abduct them, she said.

She made her way through Mexico by bus and hoped to seek asylum in the United States, paying smugglers $1,000 this summer to cross the Rio Grande river. But border agents quickly expelled them before Pinedo got a chance to tell them her story.

Desperate, she decided two weeks ago to send her daughter across the border alone. Her daughter is now in U.S. federal custody for minors, waiting to be released to Pinedo’s relative who resides in Los Angeles.

Now, with the humanitarian exemptions to the expulsion policy dwindling away, Pinedo is running out of options to seek safety and reunite with her daughter.

U.S. President Joe Biden, a Democrat, has kept the March 2020 public health order in place and recently extended it.

In addition to pushing migrants back into northern Mexico under the policy, the administration last week started flying migrants to Mexico’s southern border with Guatemala.

Biden, who took office promising a more humane approach to immigration than his Republican predecessor Donald Trump, implemented a system earlier this year to allow some migrants deemed the most vulnerable to apply for protection in the United States. He also exempted unaccompanied minors from the policy.

A consortium of non-profit organizations that helped the administration identify at-risk migrants for these exemptions is discontinuing their program at the end of the month, groups involved said. The groups have said they want to see Title 42 ended and always saw the exemptions as temporary.

At the same time, a separate similar process organized by the American Civil Liberties Union (ACLU) ended on Monday, said ACLU attorney Lee Gelernt, after the organization restarted a lawsuit against the government to scrap the Title 42 policy for families.

The suit argues cutting off access to asylum at the border is illegal and that migrants face kidnapping and assault when they are left stranded in dangerous border towns in Mexico.

“The Biden administration’s decision to abruptly end humanitarian exemptions and illegally keep the border closed to asylum seekers plays into the hands of cartels who claim that they are the only reliable means for people to enter the United States,” said Noah Gottschalk of Oxfam America, one of the groups involved in the litigation.

David Shahoulian, a top U.S. Department of Homeland Security (DHS) official, said in a court declaration that the government “is committed to continuing to use mechanisms” to allow for exemptions, without elaborating.

DHS when asked about the end of the exemptions said the agency’s “collaboration with organizations referring cases is fluid,” without giving more details about future plans. U.S. Customs and Border Protection did not respond to a request for comment about individual cases. The Office of Refugee Resettlement, which handles unaccompanied minors, said they do not have official numbers but staff had noted hundreds of children referred to their care indicated they have family still in Mexico.

According Shahoulian’s court declaration, some 16,000 migrants have been given the humanitarian exemptions to date under Biden, who took office on Jan. 20. That is a small fraction of the more than a half million migrants encountered at the border, including families with small children, who have been expelled under Title 42 since February. Those numbers include individuals who may have tried to cross multiple times.

In Reynosa there are now an estimated 2,000 people – mostly families from Central America – living in a small plaza packed with a tangle of camping tents, clothing lines, and informal community kitchens near the international bridge leading to McAllen, Texas.

Ingrid Aguilar, 39, also from Guatemala has been in the plaza for two months after she and her 17-year-old son were caught by U.S. border agents and expelled. She said she fled her homeland after gangs threatened her son.

She now helps distribute food and other donations to those in the plaza, who also have little access to basic amenities. People in town charge migrants to bathe and use bathrooms, she said, which drains people’s minimal resources.

After they were expelled back to Mexico, Aguilar was so worried about her son being forced to return to Guatemala that she sent him across the border alone. She stayed, hoping for a humanitarian exemption.

Now she is stuck waiting with few answers.

“They just tell you to register and wait for a call,” she said in a phone interview. “It is so dangerous here. You escape from your country, then you end up here and it’s the same thing.”