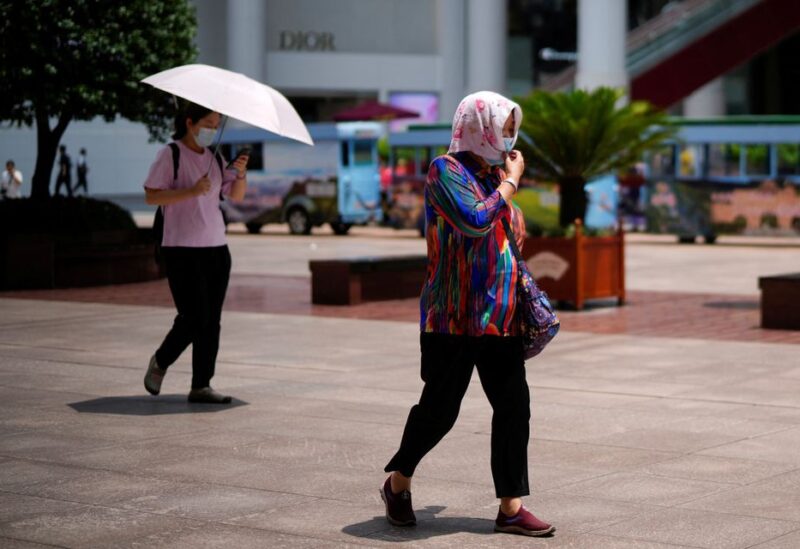 A woman covers herself with a towel and mask on a hot day, following a coronavirus disease (COVID-19) outbreak in Shanghai, China July 11, 2022. REUTERS/Aly Song

With temperatures expected to exceed 40 degrees Celsius (104 degrees Fahrenheit) over the next 24 hours, 68 localities, including Shanghai and the neighboring city of Nanjing, had issued red alerts as of 11 a.m. (0300 GMT) Tuesday.

Shanghai, still fighting sporadic COVID-19 outbreaks, warned its 25 million residents to prepare for hot weather this week. Since record-keeping began in 1873, Shanghai only had 15 days with temperatures above 40 degrees Celsius.

A widely shared photo on social media showed one COVID tester in a full-body hazmat suit hugging a one-metre tall block of ice by the road. At a sprawling Shanghai wildlife park, its staff had to go through eight tonnes of ice a day just to keep its animals cool.

“This year, the heat has arrived a little earlier than before,” said Zhu Daren, a Shanghai resident, as her five-year-old son played at a water fountain.

“Although it is just July, I feel (the warm weather) has already reached the high point. Basically, you need to turn on the AC when you get home and put on some sunscreen when you go out.”

China is facing a summer of contrasts this year, with heatwaves and heavy rainfall taking turns to wreak havoc across the country. Authorities, citing climate change, have warned of potential weather disasters from mid-July, traditionally the hottest and wettest time of the year.

In a town in southern Jiangxi province, a section of a road arched up at least 15 centimetres due to the heat, state television showed.

Nanjing, one of China’s three “furnaces” notorious for their searing summers, has opened up its underground air-raid shelters to residents since Sunday, with its war-time bunkers equipped with WiFi, books, water dispensers and even microwave ovens. The city issued a red alert on Tuesday.

In Chongqing, the second “furnace”, the roof of one of its museums literally melted, with the tiles of a traditional Chinese roof popping as the heat dissolved the underlying tar. The city raised a red alert on Monday.

This week, high temperatures, humidity and ultra-violet radiation are also forecast to envelope the central city of Wuhan, the third furnace.