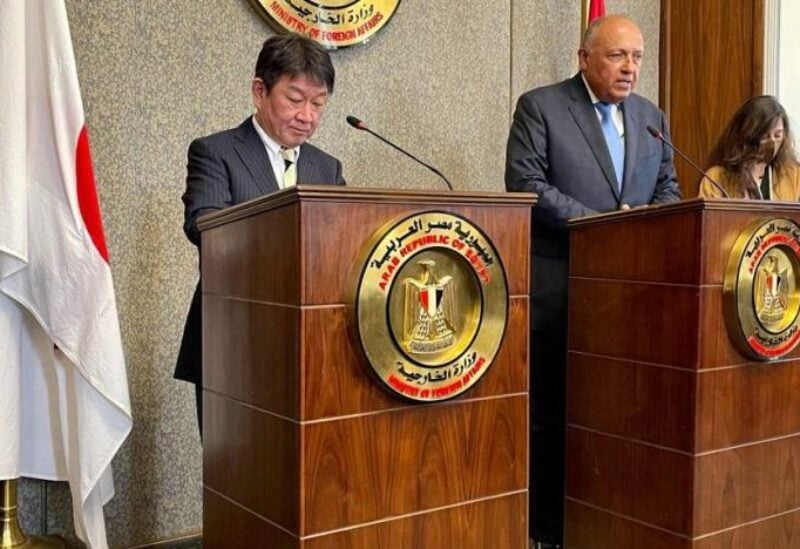 Japanese Foreign Minister Toshimitsu Motegi, who is on a Middle East tour, held talks with his Egyptian counterpart Sameh Shoukry that covered a number of issues, including regional developments.

During a joint press conference, Shoukry welcomed the Japanese minister to Cairo during the first stop of his regional tour.

Sisi reiterated Egypt’s keenness on enhancing existing cooperation with Japan based on mutual trust and respect.

Shoukry said he held a meeting with his Japanese counterpart on promising opportunities for economic cooperation between the two countries, given Egypt’s strategic location that allows it to access the Middle East and Africa.

Talks tackled regional issues, including the latest developments in the Palestinian territories and Syria, Iraq, and Yemen. They also addressed coordinating efforts to achieve stability.

Shoukry said he discussed other vital issues with the Japanese official, including nuclear non-proliferation, Japan’s efforts to enhance development efforts in the African continent, and preparations for Tokyo International Conference on African Development (TICAD) meetings.

The Egyptian minister expressed appreciation for Japan’s policies that seek to achieve stability at the international and regional levels, and its contribution in supporting the Aswan Forum, the Cairo International Center for Conflict Resolution Peacekeeping and Peacebuilding, and Japan’s contribution to peacekeeping forces in Sinai.

The Japanese Foreign Minister described Egypt as a major country in the region and one of the greatest ever civilizations, adding that he was honored to have a meeting with President Sisi.

He said Egypt and Japan share the same concern over what is going on in Afghanistan and have agreed to cooperate so that this issue would not become a source of turbulence in the region.

Motegi urged all bodies concerned to restore peace and security in Afghanistan and protect civilians and properties there.

Motegi added that during a series of meetings, they asserted the importance of cooperation in bilateral projects, including the Grand Egyptian Museum project, the Egyptian-Japanese Education Partnership, in addition to measures to prevent the spread of the coronavirus.

Motegi later met the Arab League Sec-Gen, Ahmed Aboul Gheit, in Cairo and discussed ways to boost cooperation between the League and the Japanese side within the framework of the Japan-Arab Economic Forum, which was established in 2009.

An official source at the General Secretariat said that Aboul Gheit briefed the Japanese minister on the League’s position on the Grand Ethiopian Renaissance Dam (GERD) crisis, stressing its support for Egypt and Sudan’s historical and legitimate rights.

The source pointed out that the talks dealt with various Arab and Asian issues of common interest, most notably the crisis in Syria and Libya.

The source clarified that the meeting also highlighted the developments of the Palestinian cause, pointing out that the Secretary-General thanked the Japanese side for its continuous support to UNRWA.

He also lauded the urgent Japanese humanitarian aid provided to Palestine to meet the needs arising from the recent war in Gaza and the repercussions of the coronavirus pandemic.